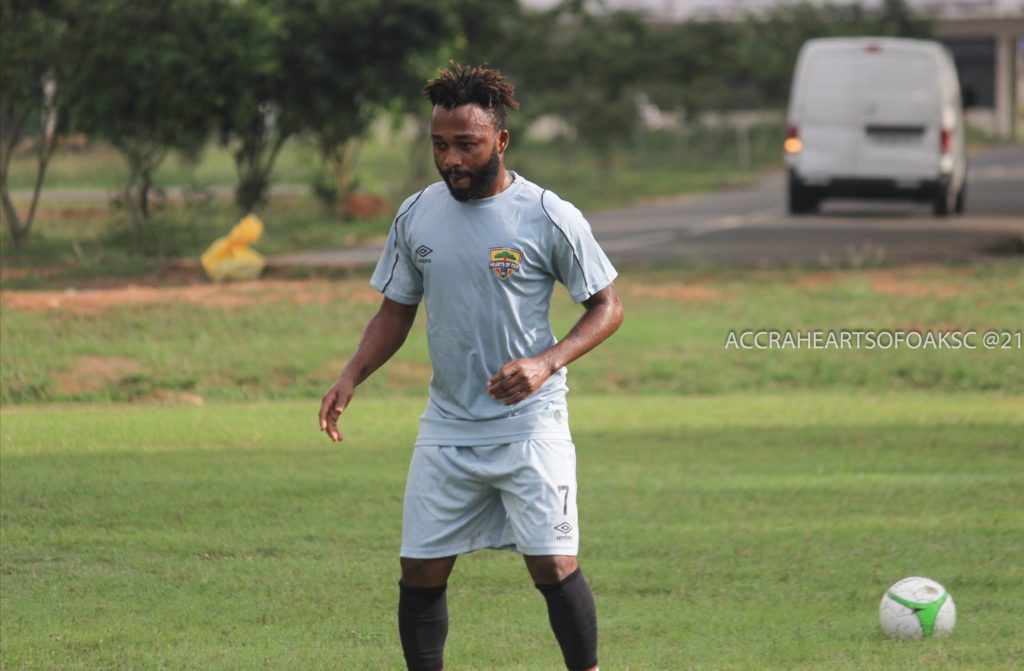 In an extraordinary turn of events, midfield maestro Gladson Awako has shockingly told Hearts of Oak he is no longer interested in playing for the Ghanaian giants barely a month after joining the Accra-based powerhouse, Ghanasoccernet.com understands.

The highly talented enforcer has also not trained with the Phobians for more than two weeks with their crucial CAF Champions League clash with Guinean side looming on Sunday.

The 30-year-old has reportedly informed the club's hierarchy of his latest decision and it appears final and this will come as a massive blow of Hearts who are seeking to return to the top of African football.

Multiple highly-placed sources at his immediate former club Accra Great Olympics have confirmed that representatives of the player have asked the club to refund the midfielder’s transfer fee to Hearts of Oak to abrogate his contract with the ambitious Phobians.

A top Hearts of Oak official claimed on Wednesday when Ghanasoccernet.com contacted him insisting that he was unaware of Awako's desire to quit the club. He refused to return his promised call on the matter.

Several close associates of Awako and people with knowledge of the issue have also confirmed the heart-breaking report for Hearts but a top official of the club failed to confirm or deny the report when contacted by Ghanasoccernet.com.

However, Awako himself has denied the report claiming he has been unwell – citing the unknown illness as the reason for his absence from the training ground of the double winner of the Ghanaian football season this year.

"I have not said I am leaving the club. I have not been training because I have been unwell," Awako told Ghanasoccernet.com on Wednesday when Ghana's leading football news outfit contacted him.

Its unclear what might have sparked the latest twist but sources claim the midfielder is unwilling to continue his association with the club.

The midfielder will likely miss the side's CAF Champions League match against Guinea side Cl Kamsar as he is yet to train with the side this week.

He is reportedly down with an illness to fuel speculation about his resolve to quit the club.

Awako joined the Phobians on a two-year deal after ending his deal with city rivals Accra Great Olympics.

The former Olympics poster boy was billed to take the Ghanaian champions to dizzy heights amid their participation in the 2021-21 CAF Champions League.

But that dream and ambition has been curtailed after the highly-rated midfielder decided to pull the plugs, just a month after joining the capital giants.

The news will come as as massive shock to Hearts fans who are desirous of making an impact in this year's Africa Inter Club Competition.

The former TP Mazembe enforcer has called it quit and informed the top brass of decision and is ready to refund his financial entitlement, it has been claimed claimed some quarters.

Ghanasoccernet.com Headquarters understands that Hearts are only waiting for Olympics to refund the player's transfer fee after reportedly agreeing to let him go.

The midfielder has been phenomenal since he returned to the domestic top-flight last season.

He raked in six goals and provided seven assists as the Wonder Club finished an impressive sixth position on the league log.