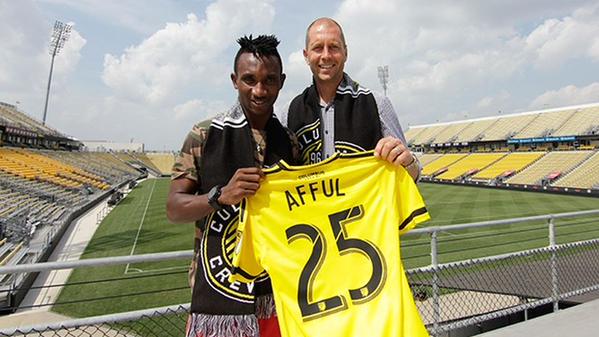 Ghana defender Harrison Afful is on the verge on leaving American top-flight side Columbus Crew to join Turkish side Mersin Idmanyurdu in a bumper cash deal after just one season at the MLS club, GHANAsoccernet.com understands.

The 29-year-old is expected to travel to Turkey this week to seal the free transfer deal that will see him triple the wages he earned at MLS side Columbus Crew.

This comes after his one-year contract with the MLS side expired with Columbus Crew keen on extending his contract but he has opted to consider the massive cash deal from Turkey.

Insiders have told Ghana's leading football news outfit that the talented right-back and his agents started talks over the bumper cash deal since last week.

Afful and his representatives have been holding talks with the player while he is on holidays in his home country of Ghana and he is expected to travel to Turkey to complete a medical before sealing the deal.

The defender's departure from Columbus Crew will be a huge blow for the MLS Cup finalists as the right-back made a huge impact since joining them.

He helped the USA-based Columbus Crew to reach the final of the MLS Cup but they were defeated by Adam Kwarasey's Portland Timbers.

Afful's contract with Esperance will expired at the end of last season and the the 29-year-old refused to extend his contract before sealing the move to the USA.

Afful was signed as a Discovery Signing from Esperance where he played in the Tunisian top flight for six seasons.

Afful, 29, scored 16 goals and creating 25 more in 173 appearances for the Tunisian giants before leaving them.

He won the CAF Champions League with Esperance in 2011 and scored some of the crucial goals for them on their way to the title.

Afful played for Ghana at the 2014 World Cup in Brazil and won a Silver Medal with the Black Stars in the 2015 Africa Cup of Nations.

The right-back won the Tunisian title four times before switching to the United States.