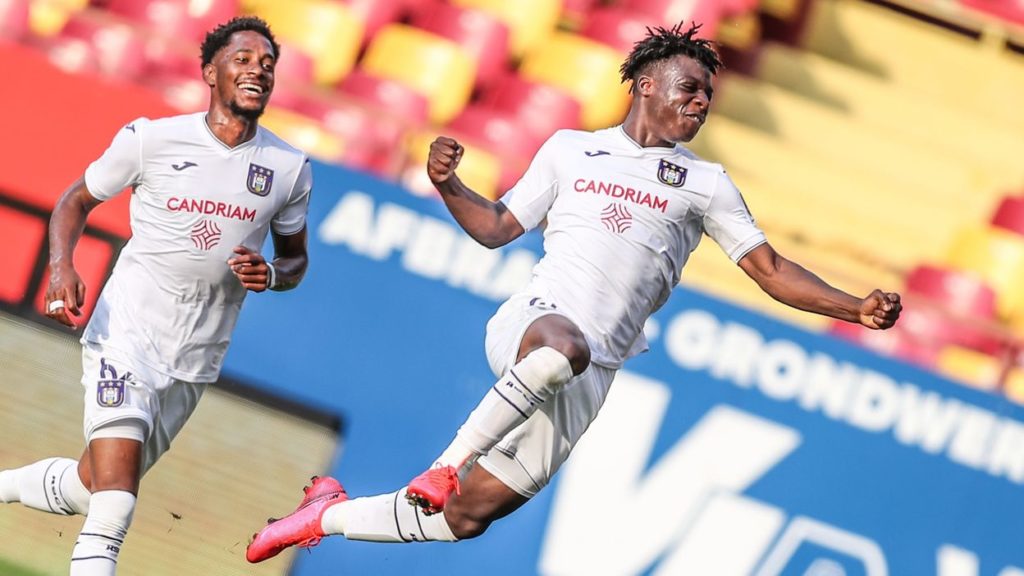 Anderlecht winger Jeremy Doku left the Belgium giants on Monday to France to complete a mouthwatering move to Ligue 1 side Stade Rennais, GHANASoccernet.com can exclusively report.

The 18-year, who was a key target of English Premier League Champions Liverpool, is moving to France in a deal that will see him become biggest transfer, after agreeing to terms with the French outfit early on Monday.

Agents close to the deal of the player of Ghanaian descent have told Ghanasoccernet.com that the player left Brussels on Monday afternoon to undergo a medical at Rennes.

Rennes are expected to pay the Belgium outfit 26 million Euros, surpassing the amount paid for Youri Tielemans by AS Monaco in 2017.

Liverpool coach Jurgen Klopp was keen on the player and had sent scouts to watch the speedy and tricky youngster in the league matches in the Belgian top-flight.

However Rennes looks to have come up with the right amount to force the move for the talented youngster.

Doku will sign a five year deal with the French side, who will be playing in the UEFA Champions League this season.

The news of the winger's move will come as shock to many following interest from English giants Liverpool and Manchester City.

Both clubs showed interest but failed to make an official bid, leaving the window open for Stade Rennais.

Doku is enjoying an amazing season with the Purple and White, having scored twice and created four goals this season.

GHANASoccernet.com can also reveal the player is undergoing his medicals and will put pen to pay immediately he completes his mandatory check up.

The Belgium born with Ghanaian heritage recently earned his national team call up, representing the European country in the UEFA Nations League.

Anderlecht were willing to keep their most priced asset but the offer was too good to reject.