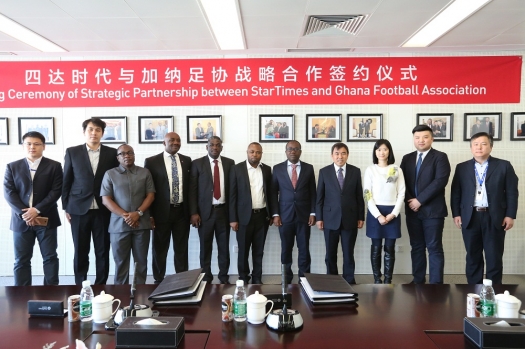 Africa’s leading pay-TV operator StarTimes Group signed a ground-breaking media agreement with Ghana Football Association on Tuesday, vowing to promote the Ghana Premier League in sub-Sahara Africa and help in the infrastructural development of the game in the West African country in the coming decade.

According to the strategic partnership agreement, StarTimes acquires all media rights of the Ghana Premier League, the Gala, the National Division One League, the MTN FA Cup, the Ghana Women’s League and the Ghana Juvenile League for the next 10 years.

StarTimes will pay $17,950,000 for the deal, provide ten artificial pitches and a fully equipped modern OB van to the GFA  over the next ten years.

StarTimes will invest more in the production of programmes on Ghana Premier League and broadcast more matches of the league in Ghana and other African countries.

“StarTimes is a world brand and well-known in the whole Africa. Ghana football is also a well-known brand and our national team is one of strongest powers in Africa,” said Kwesi Nyantakyi, President of Ghana Football Association, noting that the partnership between StarTimes and Ghana Football Association is looking forward to improving development of football in Ghana.

Nyantakyi said: “We authorize media rights of all major leagues or tournaments under Ghana Football Association to StarTimes. And StarTimes will deeply involve itself in the production and promotion of these leagues and bring much investment to our country.”

Pang noted that Ghana football has stayed at a high level in world football by playing at World Cup finals three times in succession and winning African Cup of Nations for four times.“We would like to bring more excellent football matches to nearly 9 million subscribers of StarTimes in Africa and we may introduce Ghana Premier League to Chinese football fans in the future, being a bridge between Chinese and African sports industries. ”

StarTimes is an experienced TV operator in football broadcasting. In 2015, StarTimes signed an exclusive broadcasting contract with the German Bundesliga and the International Champions Cup (ICC) for 5 successive years. StarTimes has exclusive rights and got the rights to televise the French Ligue 1 and the Italian Serie A for all Sub-Saharan countries

Pang said: “The Ghana Premier League is the first top African native league that StarTimes signs, and people can expect more in the future.”