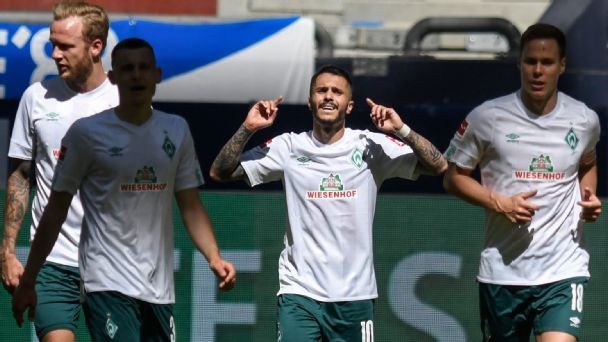 Former German champions Werder Bremen kept alive their hopes of avoiding relegation from the Bundesliga when a spectacular goal from Leonardo Bittencourt gave them a lifeline 1-0 win at Schalke 04 on Saturday.

The result left Werder in 17th place on 25 points from 28 games, two points behind 16th-placed Fortuna Duesseldorf, who occupy the relegation play-off spot and were playing leaders Bayern Munich in the late afternoon kick-off.

Bittencourt grabbed a potentially vital winner for Bremen in the 32nd minute when he unleashed a thunderbolt into the top corner from 25 metres. The loss leaves Schalke 10th on 37 points and extends their winless league run to 11 games.

The home side missed two gilt-edged chances in the second half as Werder keeper Jiri Pavlenka denied Benito Raman with a superb reflex save before Michael Gregoritsch volleyed over the bar from 12 metres. (Writing by Zoran Milosavljevic; Editing by Hugh Lawson)