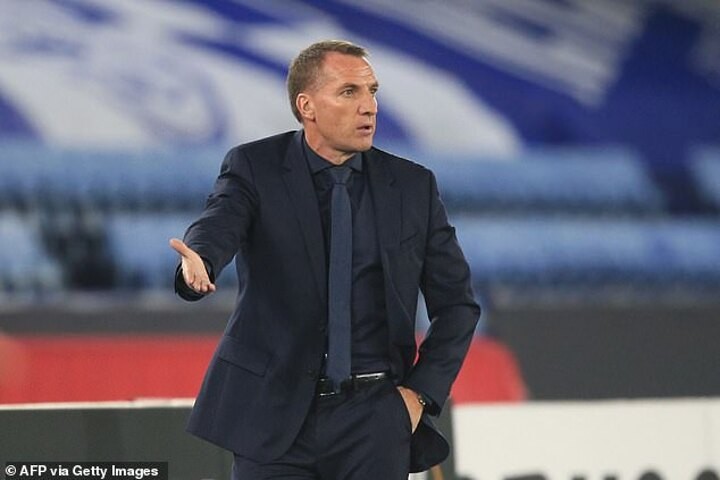 Brendan Rodgers has backed Mikel Arteta in his decision to sideline Mesut Ozil, saying that players must be 'working talents' to succeed at the highest level.

World Cup winner Ozil has not featured for the Gunners since March and was left out of Arteta's squads for both the Premier League and Europa League.

Rodgers, whose Leicester side face the Gunners on Sunday, hailed the World Cup winner as a 'wonderful talent' but said he was not sad to see a player of Ozil's quality not playing football.

'He's a talented player but it depends on your structure,' said Rodgers. 'I'd be very much like Mikel, we need every player to contribute to the defensive aspect of the game as well as the attacking aspect,' said Rodgers. 'The team has to be one brain. Everyone needs to function and work together.

'He's a wonderful talent and he's a very creative player, absolutely. He can make the last pass but it's about the team. If you feel that a player can't press the game or doesn't want to press the game — I'm not saying that's him — it has to fit into not just your attacking structure but also your defensive one.

'If one person doesn't do their job, then you can suffer as a team. He's a talent, but as always with talent, you've got to be a working talent.'

Arteta this week said he had 'failed' for being unable to get the best out of Ozil and denied speculation that off-field issues were a factor in his decision despite the playmaker creating more chances per game than any other Arsenal player. Ozil released a statement following his exclusion saying that 'loyalty is hard to come by nowadays'.

Ozil refused to take a pay cut to help Arsenal through the coronavirus pandemic, though the club still went on to make 55 of their staff redundant, including the club's dinosaur mascot Gunnersauraus, whose salary Ozil then offered to pay. The 32-year-old was also disappointed Arsenal did not back him when last December he criticised the treatment of Uighur Muslims by China.

'I take full responsibility,' said Arteta. 'I have to be the one getting the best out of the players. It is nothing related to any behaviour or, like I read, the pay cuts. It's not true. It's my decision, if someone has to blame me.'

Rodgers hopes to have James Maddison in his No.10 position at the Emirates Stadium, after the midfielder made just his second start of the season in the Europa League win over Zorya Luhansk following hip surgery over the summer and a calf niggle in recent weeks.

'I always say to the attacking players: "Don't run forward if you can't run back",' said Rodgers. 'You've got to be able to do the dirty work, because that's the highest level of the game.

'You think of any top team in the world and some of the attacking players. Look at the European champions Bayern Munich, Gnabry and Muller and the guys that play on the sides. Look how hard they work. Look at Liverpool, the champions of the Premier League. Look at Sadio Mane, the work that he puts in. That's what you've got to do. You can't carry anyone.

'It's okay having talent. But at the highest level of the game, you have to be working talents, if you're going to play in the big games in the big teams.'