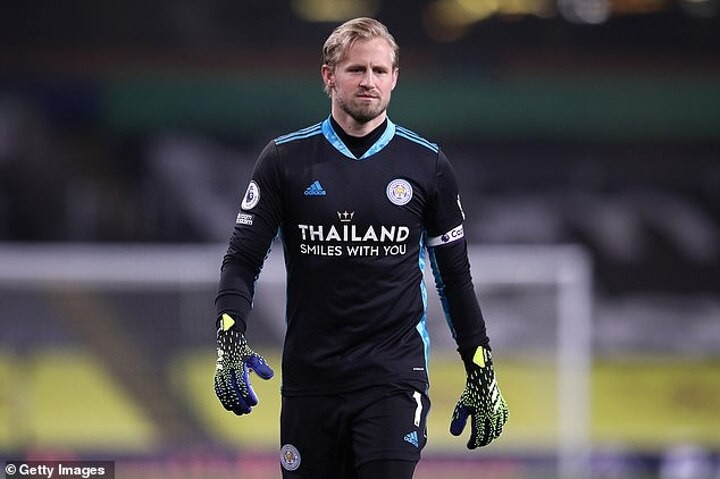 Schmeichel was beaten after four minutes when Matej Vydra intercepted a loose Hamza Choudhury pass and lashed into the net as the Czech ended a goal drought in the league lasting more than a year and 1,212 minutes on the field.

After Kelechi Iheanacho had equalised with a fantastic volley, Schmeichel came to the fore as he kept out headed efforts from James Tarkowski and Chris Wood, the latter denied by the shot-stopper's fingertips.

Schmeichel was bailed out by a post after the hour following Ashley Westwood's crisp effort from the edge of the box but Leicester rallied, with Youri Tielemans also thwarted by the goalframe as the sides settled for a 1-1 draw.

Rodgers was pleased with the overall display - as his injury-ravaged side avoided a third successive defeat, which would have been a first under his reign - and was quick to pay tribute to Schmeichel.

'He's been brilliant for me in my time here, there's moments where it looks like it's going to be a goal and he pulls off a save,' said Rodgers. 'His concentration and his desire to stop the ball going in the net is so good.

'He always produces for us, he's absolutely outstanding when he had to be here. That's why he's one of the top keepers at this level.

'We made an awful start in the game to concede so early, that always tests your mentality and spirit, but I thought we came into the game, showed good moments of quality in the first half.

'When we were playing and breaking through we looked a real threat and we were unfortunate not to have won the game, with Youri hitting a post. But if you can't win it you take your point and move on.'

Leicester have lost to Slavia Prague in the Europa League and Arsenal in the top flight in the last week, while injuries to Harvey Barnes and Jonny Evans meant the Foxes' resources were stretched even further at Turf Moor.

While Evans' calf complaint will likely preclude his involvement in this weekend's trip to Brighton, Barnes is set to go under the knife on Thursday on a knee problem, which is set to rule the forward out for six to eight weeks.

'He's a huge miss for us, he's been absolutely brilliant for us and he's been getting better and better,' said Rodgers, who is already without Ayoze Perez, Dennis Praet, James Maddison, James Justin and Wes Morgan.

'But thankfully it wasn't as long as maybe it could have been, so hopefully he can be back for the latter part of the season.'