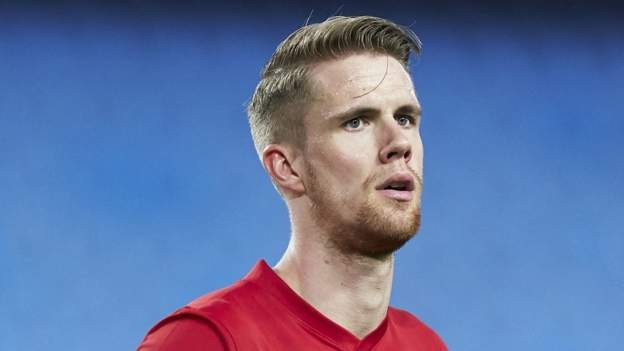 Brentford have signed Norway centre-back Kristoffer Ajer from Celtic on a five-year-deal.

The 23-year-old has joined the newly-promoted Premier League club for an undisclosed fee.

Ajer was a first-team regular for Celtic over the past four seasons, during which he won three consecutive Scottish Premiership titles.

He added Ajer was "ready to perform in the Premier League" straight away.

"We think he fits the position specific profile perfectly, especially on the ball," said Frank.

"Kris is very composed and can find the right passes between the lines."

Ajer, who has 23 caps for Norway, joined Celtic in 2016 and, after spending the second half of the 2016-17 season on loan at Kilmarnock, went on to make 176 appearances for the Glasgow club across all competitions.

Celtic announced the signing of Sweden centre-back Carl Starfelt from Rubin Kazan on a four-year contract on the same day Ajer's move was confirmed.

Ajer is Brentford's second signing of the summer, after bringing in Nigerian midfielder Frank Onyeka from FC Midtjylland on Tuesday.

Brentford ended their 74-year exile from the top flight by beating Swansea 2-0 in the Championship play-off final in May.

Gold Rush: How Britain's Olympic dreams were rebuilt after a disappointing 1996An exclusive BBC News special: Dominic Cummings is interviewed on his role in Brexit, the pandemic and the government