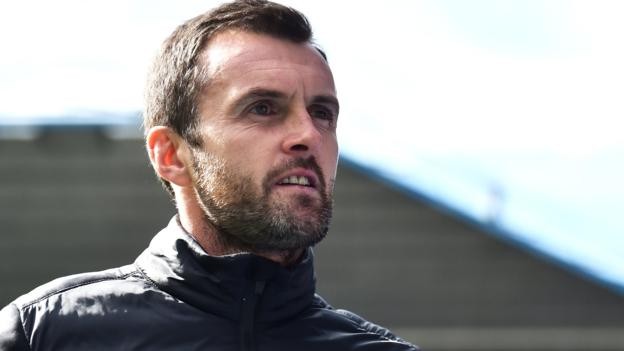 Ollie Watkins will be key for Brentford, having scored four goals for the Bees this seasonFollow live text coverage of Saturday's EFL action from 12:00 BST

Brentford are well stocked for the visit of struggling Stoke, as only Luka Racic and Mads Bech Sorensen are unavailable.

However, the Bees have only won one of the past six games, and only two in the whole season so far.

Stoke City are yet to record a league win and remain without talismanic captain Ryan Shawcross (broken leg).

However, boss Nathan Jones says he had an "almost fully-fit squad" to select from otherwise.

Brentford are unbeaten in their last three home league matches against Stoke (W2 D1 L0) since a 1-0 defeat in January 2000. Stoke, who lost 1-3 against Brentford in January in Nathan Jones' first league match in charge, have never lost consecutive league matches against the Bees. Brentford have the second worst conversion rate in the Championship this season (5.3%), while Stoke have conceded the highest percentage of their shots faced (23.3%). Stoke are winless in their last 23 league matches in London (W0 D9 L14) since a 2-1 win at Spurs in November 2014. The two players with the most touches in the opposition box in the Championship this season without scoring a goal are Brentford's Sergi Canos (35) and Henrik Dalsgaard (30). Stoke last failed to win any of their opening eight league matches of a season in the 1989-90 campaign, when they were relegated from the second tier.