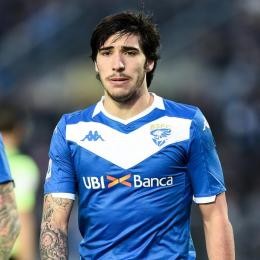 Asked by Italian media about resident star deep-lying midfielder Sandro Tonali (20), Brescia owner, Massimo Cellino, stated: "I'm in love with a bunch of players, to the extent I'd like to be able to never having to put them up for sale. When we talk about Tonali, however, I understand his family has great expectations on his career, especially his mum. And I have to acknowledge the noteworthy bids reaching out to me, addressed to signing him. Nasser (PSG chairman Al-Khelaifi, Reporter's Note), for instance, wants to bring him in. He was texting me about Tonali no earlier than today, but Sandro isn't keen about joining Paris. Fiorentina would go nuts to get him in, Napoli offered me 40 million euros. Tonali, however, is rather inclined to join either Juventus or Inter Milan. Just before the pandemic-related break, Barcelona FC stretched out to a €65m cash bid, with two young players of their cantera on top of that. Both those boys' worth is around 7 million euros and a half, one of them is a full-back. I don't think Barça liked what they were answered, and that wasn't from the player. Anyway, Tonali, right now, needs to focus only on the twelve game left to play as a Brescia man".