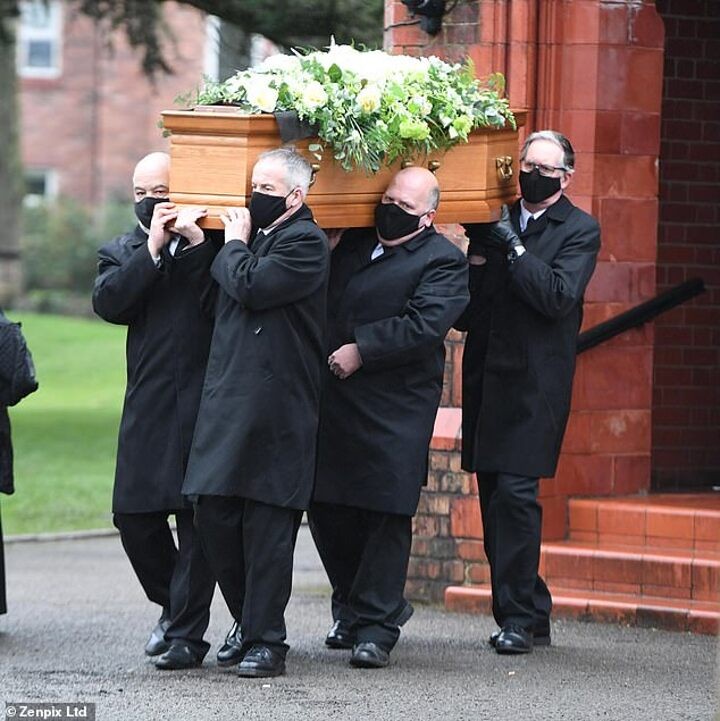 The funeral of Colin Bell took place on Tuesday, with former team-mates of the Manchester City and England legend in attendance.

Bell died this month at the age of 74 following a long-term, non-Covid related illness.

Brian Kidd and Mike Summerbee were among those of his former colleagues at the service in Hale, Manchester, as well as his widow, Marie.

The coffin was draped in his iconic sky blue No 8 as it made its way to St Peter's Church in a hearse.

Bell, nicknamed the King of the Kippax, won all three major domestic trophies at Maine Road and was part of the team to lift the 1970 European Cup Winners' Cup.

He remained a regular at the Etihad Stadium in an ambassadorial role on matchdays and charmed supporters with tales of his 13-year stay at the club.

The club named a stand after the 48-cap England international in 2004 after he scored 152 goals in 492 appearances.

'Colin Bell will always be remembered as one of Manchester City's greatest players and the very sad news today of his passing will affect everybody connected to our club,' chairman Khaldoon Al Mubarak said after his death was announced this month.

'I am fortunate to be able to speak regularly to his former manager and teammates, and it's clear to me that Colin was a player held in the highest regard by all those who had the privilege of playing alongside him or seeing him play.

'The passage of time does little to erase the memories of his genius. The fact that we have a stand at the Etihad Stadium named after Colin speaks volumes about the importance of his contribution to this club.'

Pep Guardiola's squad paid tribute to Bell in their Carabao Cup semi-final victory over Manchester United at Old Trafford by walking out in retro kits from his era, all adorning the No 8.

Guardiola and his players dedicated the victory to Bell, saying: 'We played for him and his family,' said Guardiola, who also wore a T-shirt in tribute to Bell.

'This person helps to build something special and that is the club we have – to beat United away is for you.

'It was a sad day for all the Manchester City family. Colin Bell has a stand (named after him) at the Etihad because he was something special.

'Today it was remarkable what we achieved but we dedicate the victory to Colin Bell and his family, and the Manchester City fans who miss him a lot.

'We have to play and defend legacies like Colin Bell and Mike Summerbee helped us to create at this incredible club.

'Colin is a big loss. It's sad news but we can continue and be incredibly proud of what these guys years ago created.

'We don't have as many trophies in the cabinet compared to some teams in England and Europe but Colin Bell creates this feeling.

'So it is fantastic to go against rivals United at Old Trafford and play incredible football and win and go to Wembley again.'

'How we played in this match was a reflection of him (Colin Bell),' added goalscorer John Stones.