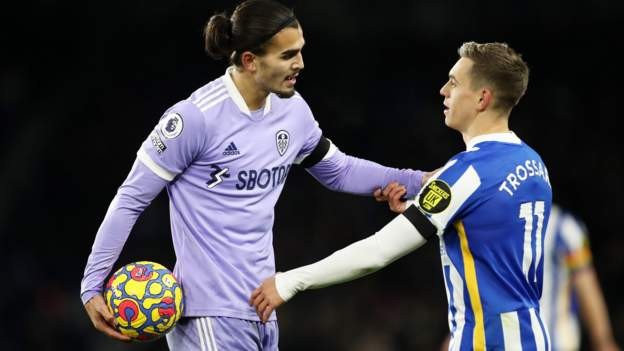 Brighton's winless run extended to nine games as they failed to take their chances in a goalless Premier League draw with Leeds.

In the first half, Illan Meslier tipped Leandro Trossard's shot on to the upright and Jakub Moder rifled the ball against the outside of the post from a tight angle.

And late on Solly March's effort struck the post.

Seagulls right-back Tariq Lamptey was excellent in the first half, creating five chances, as he continues his comeback from injury.

Leeds, who brought off Kalvin Phillips at half-time, had few chances but Tyler Roberts was denied twice by good Robert Sanchez saves in the final 10 minutes.

Marcelo Bielsa's side remain just outside the relegation zone, while Brighton rise to eighth.

After winning four of their opening five league games, Brighton are now winless in eight in the Premier League - although six of those have been draws.

It was their usual story of dominating and not taking chances.

Maupay had a better chance than any of the efforts off the woodwork though when he spooned a shot over from six yards out.

In the first half, Lamptey created five chances - his most in a Premier League game - with Junior Firpo lucky to avoid a second booking for multiple fouls on the full-back who ran him ragged for 45 minutes.

Leeds created a bit more after a double switch at half-time, with Pascal Struijk and Jamie Shackleton replacing the fortunate Firpo and Phillips, who had been playing at centre-back.

But it was their third sub in Roberts who brought them to life. He ran into the box and forced a save from Sanchez's legs - and then the keeper denied him with a diving save in the bottom corner.

March replaced Lamptey and had two good chances, including his effort off the post.

Brighton have only scored 12 goals this season - fewer than two of the teams in the relegation zone and the same as 17th-placed Leeds.

Jurgen Locadia came on for his first Premier League appearance since August 2019, and teenage Ecuador winger Jeremy Sarmiento made his league debut - but neither could help them find the breakthrough.

Tyler Roberts (Leeds United) wins a free kick in the defensive half.

Attempt missed. Daniel James (Leeds United) right footed shot from the right side of the box is too high. Assisted by Pascal Struijk.

Attempt saved. Solly March (Brighton and Hove Albion) left footed shot from the centre of the box is saved in the bottom right corner.

Diego Llorente (Leeds United) wins a free kick in the defensive half.

Jamie Shackleton (Leeds United) is shown the yellow card for a bad foul.

Jeremy Sarmiento (Brighton and Hove Albion) wins a free kick in the defensive half.

Attempt missed. Yves Bissouma (Brighton and Hove Albion) right footed shot from outside the box is high and wide to the right. Assisted by Leandro Trossard.

Attempt saved. Tyler Roberts (Leeds United) left footed shot from the centre of the box is saved in the bottom left corner. Assisted by Pascal Struijk.

Yves Bissouma (Brighton and Hove Albion) is shown the yellow card for a bad foul.