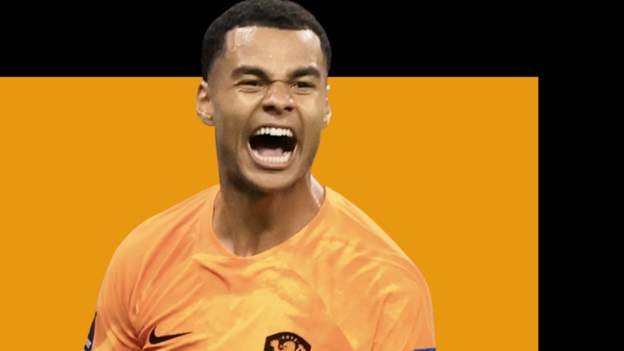 Cody Gakpo is having a much better time at this World Cup than he had during the last one.

Back in 2018, he was a teenage hopeful watching the tournament - for which the Netherlands had failed to qualify.

Four years on, he has played a big part in the Dutch progression to the last 16 as unbeaten group winners.

The PSV Eindhoven winger has set the tournament alight for the Dutch, scoring the opening goal in all three of their group games, including Tuesday's 2-0 victory over hosts Qatar.

The three-time finalists have breezed through to the first knockout round, where they will face the United States - and are determined to make up for lost time.

"It is really special for us to be here because last time we weren't," said Gakpo. "We topped the group and have worked really hard. It is great for us.

"In 2018, I was watching the games and it was less fun because the Netherlands weren't there.

"I was 19. It wasn't really a goal to be at a World Cup back then; it was more about being in the first team at PSV. I worked and worked then set goals to try to be in the national team.

"Now we are here and I am really happy we are doing well as a team and hopefully we can keep winning games."

Gakpo can 'become a star'

Manchester United have been heavily linked with a move for Gakpo, but the Premier League side may well be forced to fork out a lot more money to get him if he continues his impressive performances at the World Cup.

Standing at 6ft 4in, Gakpo is athletically built and looks the complete package with his pace, and his ability to create a goal for team-mates as well as find the net himself.

He showcased his aerial prowess as the Dutch defeated Senegal 2-0 in their opening game, beating Chelsea's Edouard Mendy to a cross to head in, before smashing in early in the 1-1 draw against Ecuador and finishing off a fine move against Qatar.

"Cody is a very young player, he is 23 but looks younger," said boss Louis van Gaal. "He has only been playing with PSV for two, three years and always played from the left.

"He did not want to play in the centre or at 10 but he did have to for me. Now he thinks I am a great head coach.

Gakpo will 'go to the top'

Against Qatar, Gakpo became the first Netherlands player to score in his first three World Cup games and he highlighted why he could be going all the way to the top by matching previous Dutch greats.

Fine company to have - and captain Van Dijk has been impressed.

"Hopefully Cody can go to the moon and back," said the Liverpool defender. "He is a very good player and a good boy too.

"What we see in training is what you see on the pitch. There is still so much potential and I hope he can carry on showing it for us. We are very happy with him."

Former Manchester United forward Depay said: "He is very important. He scored in three out of three games - that record speaks for itself. One of his qualities is that he is a goalscoring player; he gets into positions where he can find the net.

"He has been consistent from the first moment, so I am delighted to see him performing like this on the big stage."

Manchester City defender Ake added: "He is a top player. You can see that. It is not just about his talent; he also works very hard. He is a very nice guy and I am sure he will go to the top."

Gakpo has been in remarkable form, having been involved in 35 goals in 29 games for club and country this season - 17 goals and 18 assists.

But he was modest in his answer when asked if he is aiming to be the World Cup's top scorer.

"The most important thing for us is to win games," he said. "If I can contribute with goals, that is really good for me and the team.

"If I am not scoring and we are winning, that is also good."