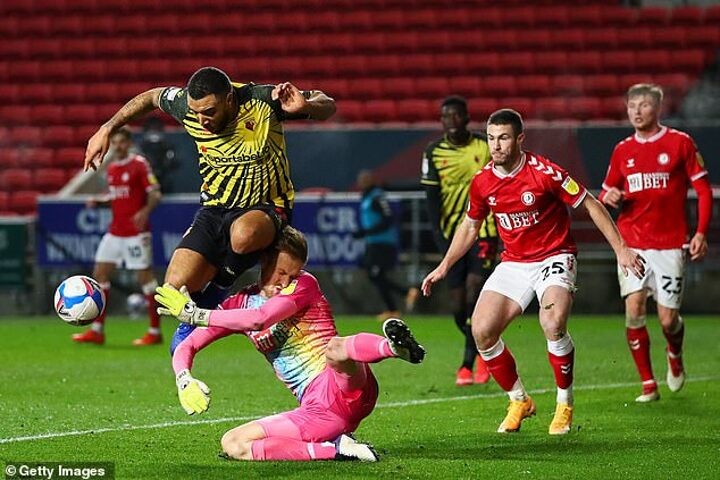 Bristol City missed the chance to keep pace with the Championship top two as they were forced to settle for a point at home to a blunt Watford side.

The result left both sides unbeaten in four league outings, but neither will look back at this contest with any great satisfaction on an evening where poor finishing and snatched chances set the tone.

It was the visitors who enjoyed the better of the first half, dominating possession and wasting the better off the openings. Ismaila Sarr failed to find the target when well placed on the right-hand side of the area, but it was less conventional source that was guilty of squandering their best chance.

Up from the back for a set piece, captain Craig Cathcart could somehow only divert the ball into the side-netting after James Garner’s free-kick ricocheted its way to the back post.

They started the second half brightly, too. Only a last-ditch challenge by Taylor Moore denying Sarr after a long ball from the Watford backline caught out Tommy Rowe.

Bristol City were finding chances few and far between. Presented, then, with their best opportunity after 52 minutes, you felt they might regret Famara Diedhiou’s inability to connect with Antoine Semenyo’s low centre after 52 minutes – the Senegal forward missing his cue after nimble work down the left by his team-mate.

Semenyo decided to take matters into his own hands on the hour mark, when he danced past right-back Jeremy Ngakia and attempted to steer the ball into the far corner from inside the six-yard box, but his curled effort rolled agonisingly wide.

In a bid to break the deadlock, Watford head coach Vladimir Ivic through on his trusted Plan B in the form of Troy Deeney in the 67th minute.

The 32-year-old provided the Hornets with a focal point that saw them dominate the final stages – and create the best chance, too.

That fell to Domingos Quina, but the midfielder was denied by the fingertips of Dan Bentley after Sarr’s cross had been knocked invitingly into his path.