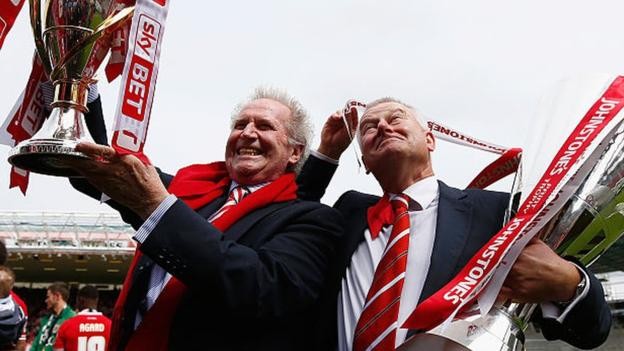 Keith Dawe's first season as chairman saw the club relegated from the Championship, but they subsequently earned promotion back to the second tier and finished eighth in 2018-19

Keith Dawe has stepped down as chairman of Bristol City and been replaced by Jon Lansdown, son of the club owner Steve Lansdown.

Dawe first invested in the Robins in 1996, the same time as Lansdown Sr, and leaves after seven years as chairman.

His tenure has included relegation from the Championship and their return as League One champions, as well as major redevelopment work at Ashton Gate.

Dawe said the time was right to allow the "next generation" to take charge.

Jon Lansdown has been promoted from vice-chairman, a post he has filled for the past five years.

"I look forward to building on the foundations that we have laid over the last few years and know that Keith will continue to be an invaluable source of experience and knowledge to me going forward," he said.