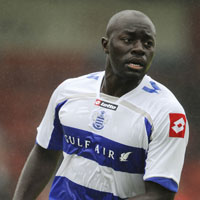 The frontman has been the subject of speculation of a return to Ashton Gate, having spent an injury-hit spell at the Championship club over the second half of the 2009/10 season during which he made just seven appearances.

Agyemang is expected to leave Loftus Road on loan after being left out of QPR's 25-man Premier League squad.

However, Millen insists he is not in the market to bring Agyemang to Ashton Gate

"There's absolutely nothing in it. We've not even made an enquiry," Millen told City's official website.