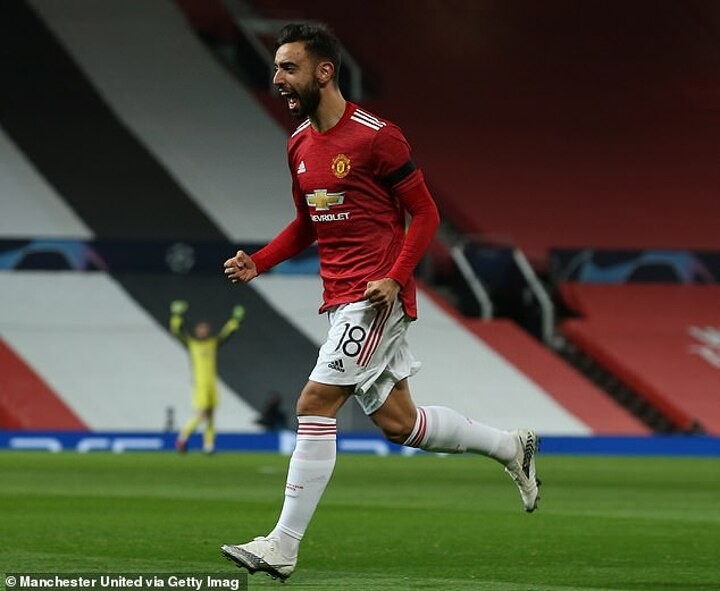 Manchester United's delight with Bruno Fernandes' recent brilliance on the field may well be tempered by a packed Christmas schedule on the horizon, provoking increasing fears of fatigue for the club's star man.

The 26-year-old has missed just two games for his club since his £68million move from Sporting Lisbon in January, namely the wins against LASK in the Europa League in August and the League Cup defeat of Brighton in September.

The 3-0 win at the Amex in the Carabao Cup is also the only occasion on which he has not been named in the Old Trafford side's squad for a competitive fixture.

It is a testament to the consistency he has brought and stability he has added in abundance to the midfield with his 35 appearances to date, which have included 21 goals - the most recent of which came in a double against Istanbul Basaksehir - as well as 13 assists.

It was fellow midfielder Paul Pogba's £89m arrival at the club in 2016 that many viewed as the signing who would help run the midfield given his outstanding performances for Juventus.

But it is new boy Fernandes who has usurped the France World Cup winner as the general in the middle of the park and remained the lynchpin around whom boss Ole Gunnar Solskjaer continues to be build his side.

Former United winger Nani is certainly of that view, stating earlier this week: 'A big part of this team is Bruno Fernandes. Bruno now is a much better player than when we were playing together [at Sporting].

'I saw so much potential in Bruno and I told him to go to England if he decided to move to another league. I said to him: "Your game will fit there and the fans will go crazy for you!"

'The style of his football is something fans appreciate. He is a player who likes to take risks in the game, who wants to take the responsibility of the game on his back and make difficult passes, dribbles and shots.

'He doesn't care about mistakes; he only thinks about success and making the team have success. He knows what that takes. That's Man United, isn't it?

'Bruno has done so well until now, scoring goals and setting up a lot of goals, but he will keep improving and making the team even better.'

As Nani mentioned, his shooting ability has become of critical importance, with the former Sporting midfielder netting nine of United's 13 Premier League goals so far in 2020-21, with Edinson Cavani, Harry Maguire, Aaron Wan-Bissaka and Marcus Rashford grabbing one each.

And with the club facing no fewer than five games between December 20 and January 2 this season and nine games overall during a brutal festive period, United will be keen to keep their star man fresh as they look to push for a Champions League place and some silverware for the first time since 2017.

But if his nine-month career at Old Trafford so far is anything to by, Solskjaer appears to be reluctant to allow him any substantial period of rest, such is his prominence among the players.

Of all of the members of the Norwegian's squad, only captain Maguire has played more minutes across all competitions since February 1 than Fernandes, who made his debut that day in the 0-0 draw with Wolves at Old Trafford.

The £80m England defender has played more than 3,000 minutes, while Fernandes has spent a total 2,762 minutes on the pitch since his United bow.

That sees him rank 37th in the category of most Premier League minutes featuring all players from all the other sides to have competed in the top-flight since February, and 25th excluding goalkeepers.

The Portugal international however does top the the FA Cup category, with no United having played more than the 277 minutes he spent on the field last season as the club reached the semi-finals before being knocked out by Chelsea at Wembley.

The sample size for the FA Cup is relatively small, given that Fernandes has only played in three matches in the competition, which included the full 120 minutes in the win at Norwich, but Eric Bailly is the next closest on the list with 231 minutes played.

Fernandes does not appear at the top of the United players to have completed the most minutes in Europe or the League Cup, with Anthony Martial having seen a high of 350 minutes of Champions League action and Maguire 570 minutes in last season's Europa League campaign.

By comparison, Fernandes's 259 minutes see him appear seventh on the list in the Champions League, his 362 minutes sixth in the Europa League and 18th in the League Cup having played just 12 minutes in that competition.

Yet to relegate his United career to pure statistics of how long he has spent on the pitch across all competitions since his arrival is unbecoming of a player whose leadership qualities and creativity have already made him a fans' favourite.

The club will require every single sinew of quality he can provide both in the dressing room and on the pitch over the festive period, with a tough Christmas period set to hit United.

Difficult fixtures away at Paris-Saint Germain and West Ham kick off December, before the Manchester derby takes centre stage during the middle of the month.

Solskjaer's men then face a less daunting task at Sheffield United before beginning the festive period in earnest with the visit of Marcelo Bielsa's fearless and progressive Leeds side.

They then take on Carlo Ancelotti's impressive Everton in the quarter-finals of the Carabao Cup three days later, before travelling to the King Power Stadium on Boxing Day to take on a Leicester side who will be out for revenge after their defeat by the Red Devils on the final day of last season robbed them of a Champions League spot.

The club finish off the festive period with two home games against Wolves and high-flying Aston Villa, both of whom earned a point at Old Trafford last season.

Jurgen Klopp and Pep Guardiola have been the principal critics in the league of the scheduling and the alarming bi-product of an alarming increase of injuries that it is consequently creating.

Solskjaer himself is currently without up to six players for this weekend's encounter with high-flying Southampton, including Pogba and Wan-Bissaka and longer-term absentees Luke Shaw and Bailly.

The Norwegian also hit out before the last international break about the tight turnaround his side faced between competing against Istanbul Basaksehir in Turkey on a Wednesday and their Saturday 12:30pm trip to Goodison Park to take on Everton.

'12.30pm on a Saturday doesn't help us but that's what the Champions League gives to you,' Solskjaer said.

'It gives you a challenge because you want to be in this competition playing in midweek and we've just got to take it as it comes.

'We asked for a Sunday game but there was absolutely no help to get that.'

But should top-flight fatigue rob him of star man Fernandes - who Solskjaer has been keen to deploy at any given opportunity - due to injury over the Christmas period, those complaints may yet turn into vehemently launching a further impassioned outburst.