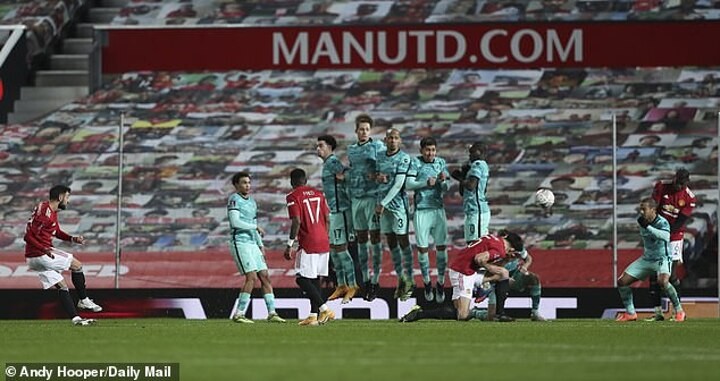 Ole Gunnar Solskjaer has revealed that Bruno Fernandes practiced free-kicks for 45 minutes after training on Saturday before scoring the decisive set-piece against Liverpool.

Fernandes, who is so often the key figure for United, scored the winner with an excellent free-kick in the 78th minute at Anfield as his side won 3-2 in the FA Cup fourth round tie.

Solskjaer disclosed that Fernandes is often frustrated with him for telling him to go inside after training.

Fernandes was named among the substitutes but made a significant impact after entering the fray in the 66th minute.

Speaking to BBC Sport, Solskjaer said: 'Great goal, good free kick. When you leave him out like I did today, he stayed about 45 minutes after training yesterday shooting free kicks so I was pretty confident he could score one if he got the chance.

'He's never happy with me when I tell him to go inside after training when he's playing the next day so he got some practice yesterday.'

United fell behind to a goal from Mohamed Salah in the 18th minute but responded, with Mason Greenwood and Marcus Rashford scoring.

Salah got another, but Fernandes' free-kick saw United progress to the fifth round and Solskajer was delighted with the character shown by his side.

He said: 'Brilliant - you know when you go a goal, down the reaction of everyone was really good. We played some really good stuff, good goals, we have to defend well against them and we managed to react well and of course towards the end there were some moments but we kept them away.'

Rashford produced an excellent performance, with his pace and flair frequently troubling the Liverpool defence.

Solskjaer said: 'Marcus [Rashford] has played up front, down the right and left and we felt if we could switch the ball early today we could attack them because Liverpool defend on the front foot so we have to be quick on the ball, we did that well.'

Rashford had to go off in the 86th minute with an injury, with Solskjaer revealing that the forward has a knee problem.

Solskjaer said: 'His knee was bothering him so he will a scan tomorrow and we will see where we are.'

After beating Liverpool, Solskjaer's side will host West Ham in the fifth round of the FA Cup.