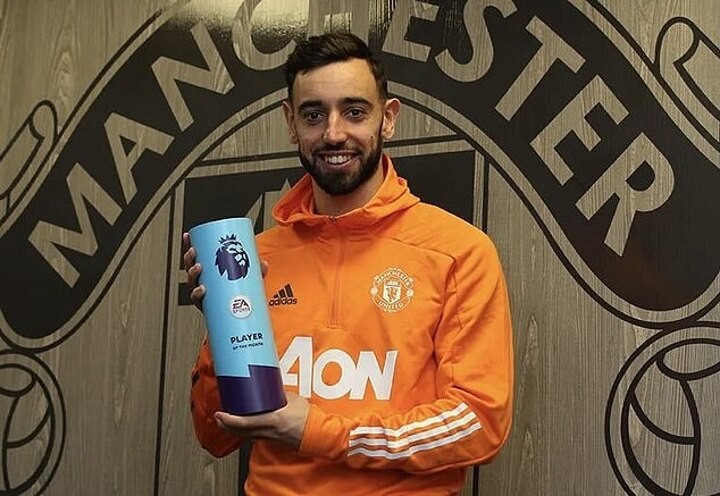 The most welcome item of football news this week came with Bruno Fernandes being named Premier League Player of the Month.

This is all the more gratifying since this is the fourth time out of seven he has received this award since joining Manchester United last January.

Not only because he is a sublimely gifted footballer. But because, above all in this time of Covid, he is by a long way the least demonstrative of superstars.

Fernandes looks distinctly abashed when his team-mates rush to smother him in congratulations as he scores a goal, which is something he does quite often.

Embarrassed, he does his best to fob them with a quick handshake. In vain, of course. Nor does he go charging about the pitch like a headless chicken.

Perhaps he knows such infantile behaviour is for the birds.

Perhaps he accepts that the taking and making goals is all in a footballer's line of work.

Perhaps he is aware that the more the others cuddle, kiss and roll around on top of each other the more they risk catching coronavirus and the greater the threat they pose to the wider community when they scamper out of their bubble.

If it is the latter, then the more power to the elbow he tries to give his mates.

And perhaps he realises that the longer the vast majority of top players carry on like this - as well as ganging together for booze-ups - the sooner they will put a stop to the game altogether.

One week ago I wrote here that it was high time the government and the football authorities called a halt.

Now, with matches being postponed as frequently as loo-rolls fly off supermarket shelves and with teams weakened by illness for many of the games that do take place, the integrity of the competitions is drastically undermined. On all counts, humane and sporting, this madness has to stop.

A couple of responsible Premier League managers argue that the risk of players and staff contaminating not only each other but their families and friends outweighs the distraction football provides for the depressed masses in lockdown.

Most of the other celebrity bosses continue embracing each other while insisting that this hazardous season runs its full course. Many defend their miscreants, chorusing: 'We can't control their instinct to celebrate.'

They should all consult the father of one of their number who, in common with his West Ham and England captain Bobby Moore, used to restrict the goal rejoicing to a quick handshake and a trot back into position for the restart. For one thing, that reduced the chances of being caught by an instant equaliser while still mentally cavorting.

As for instinct, it is basic for us all to be socially gregarious not socially distanced. It is our natural instinct to party or go for a drink or a meal with friends. One very human instinct is to visit the old folks or the grand-kids.

Another is to play football or any other sport we fancy for fun, or to go to the gym. One more is to go on holiday, or even for a drive.

The vast majority of us are doing our best to live without those basic freedoms, for the common good.

Yet one manager has gone so far as to suggest that footballers should be jumped up the vaccination queue ahead of the elderly and vulnerable. Just so this deeply compromised show can go on.

I suspect there is general agreement among one of the most entitled groups of people in the land that they should be exempt, also, from protecting the health of the rest of us.

A precious few are conscious of the public danger. Harry Kane is avoiding the scrums, although even he advocates restricting celebrations to 'high-fives' which can be infectious, also.

This weekend we will watch how Liverpool and Manchester United players conduct themselves in the match of the season so far, confident that win or lose Bruno Fernandes will do his best to set an example.

Disgrace, scandal, self-interest and financial greed were among the descriptions I applied seven days ago to the response of the Premier League, the Football Association and especially this populist government to how Covid is being spread in and by football. Today, those words resonate with even sharper urgency.

Do we really have to wait for the tragedy of a superstar footballer dying of Covid for sanity to prevail?