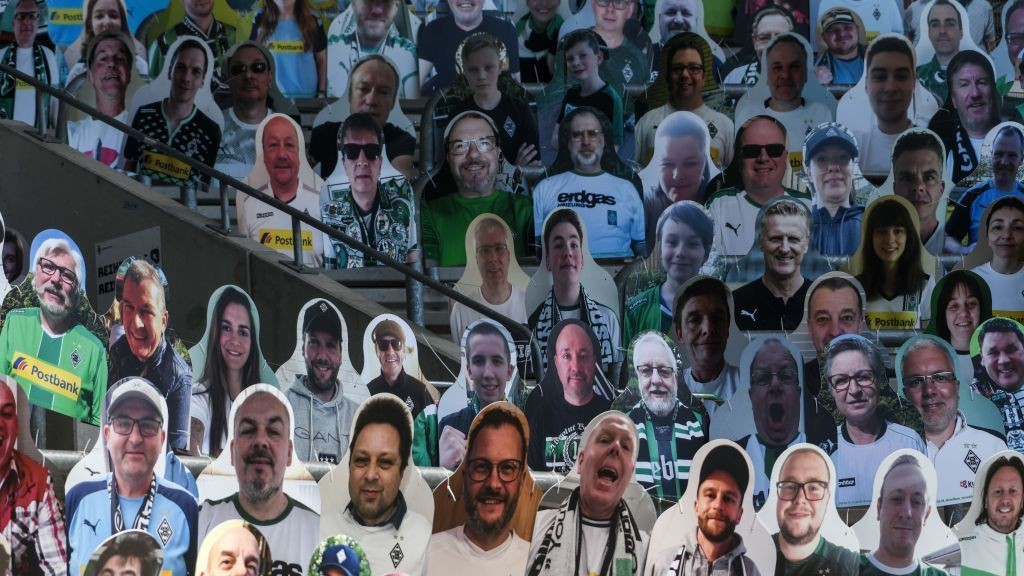 The first weekend back in the Bundesliga was one of mixed emotions. Football had returned, and with it came familiar reminders of the game the world loves -- the thrill of a Julian Brandt flick or the drama of Freiburg having a goal disallowed late by VAR against RB Leipzig. But with no fans in the stadium and the DFL's (German Football League) hygiene protocols in place, football was always going to be different. And so it proved, as a sense of pressure and waves of atmosphere were replaced with the sound of player shouts and cries, awkward goal celebrations and the soft thud of the ball being passed around the pitch.

Whatever the perception, football looks set to press on so long as it continues to prove it can. With that in mind, it is inevitable that with each passing week, each successfully completed matchday, each day of better understanding how to operate in this new world, focus will return to the sporting aspects.

One successful set of fixtures means it's too early to speak of form, but with only eight games left in the Bundesliga season there is still much to be decided.

This is Union Berlin's first Bundesliga season. Not only did Union play their first home Bundesliga game against Bayern Munich in an empty stadium, losing 2-0 last weekend, but they will also do the same for the second capital city derby of the season. Although things nearly bubbled over last time when rockets were fired out of the Hertha away end, forcing players off the field, for a fixture so much about rivalry and the history of Berlin to be played behind closed doors is to lose a great deal of context and meaning of what this game and these clubs represent.

Over the years, Union fans have donated money, time and blood (literally) to keep their club alive, leaving the east Berlin team proudly wearing their "club-of-the-people" identity. While Hertha has plenty of their own passionate fans, the arrival of a new investor and his extremely ambitious goals means the club has effectively taken the opposite approach to their city rivals, spending big to try to reclaim a place among the Bundesliga's top sides. (It might take them a while ...)

The game itself on Friday night, though, will be a gritty affair.

Union's disciplined defense will have to deal with Hertha's new sense of belief under Bruno Labbadia, who took charge after the dismal and short reign of Jurgen Klinsmann. After Sebastian Polter provided a late match winner in the game earlier in the season, more drama is very possible. Head coach Urs Fischer returns to the dugout after missing last weekend's game against Bayern due to a family bereavement, but with Hertha unexpectedly looking hot and Union lacking their ferocious away support, it could be a tough day for the team in red.

The best of the Bundesliga: Gladbach vs. Leverkusen

Gladbach's fans will be present in spirit at the stadium thanks to cardboard cutouts of season-ticket holders.

These two teams flew out of the blocks on the first weekend back, showing no shortage of fitness or a lack of touch after a two-month layoff. Gladbach blew Frankfurt away 3-1, after scoring twice in the opening seven minutes, while Leverkusen could have scored more than the four they did against Werder Bremen last Monday. (Led by two goals from Kai Havertz, they managed nine shots on target during a tough afternoon for their relegation-threatened hosts.)

This game sees two coaches who have got their sides playing fast, dynamic and active football built off a host of talented players. From Alassane Pléa, Marcus Thuram and Ramy Bensebaini for Gladbach to Havertz, Edmond Tapsoba and Moussa Diaby repping Leverkusen, this clash features two sides looking to get an edge in the top four. Simply put, it's the game of the weekend. A high-scoring draw is possible, but with Gladbach able to rely on more than one player for inspiration, Havertz's performance will be decisive.

Reality checks for Bayern and Dortmund ahead of title decider

The Bundesliga title could be decided next Tuesday night when Bayern take on Dortmund. That match has a "winner takes all" feel to it, but with only eight games left and Dortmund effectively needing to win them all if they're to stop Bayern from collecting their eighth straight league title -- the teams are separated by just four points -- this is not the time to look beyond their respective opponents this Saturday.

For Dortmund, that means taking Wolfsburg seriously; they'll no doubt pose a trickier threat than Schalke did in the 4-0 Revierderby blowout last weekend. With Wout Weghorst back from suspension and wingbacks Kevin Mbabu and Paulo Otavio coming off top performances, Dortmund will have to be wary. Nevertheless, having broken all narratives by overcoming an empty Yellow Wall and a lengthy injury list to blow Schalke out of the water, they also have every right to be confident. Julian Brandt, Erling Haaland and Raphael Guerreiro looked like they had hit late-season performance peaks, and with Marco Reus reportedly in danger of not returning from injury for the rest of the season, now is the time for Dortmund to be consistent.

While Dortmund face a test, Bayern must avoid a trap. Eintracht Frankfurt had all the rust and nowhere near enough quality against Gladbach last weekend, but they relish facing the defending champions. (November's 5-1 win for Frankfurt was their first win over Bayern in their past 16 attempts and the heaviest defeat for the Bavarians since 2009.) Perhaps coach Adi Hütter can muster some more magic, though Bayern are a different beast in Munich. Having proved in Berlin last weekend that sometimes two set-piece goals are enough to overcome stubborn opposition and a misfiring of creativity, a big win beckons for the Bavarians.

It would make a perfect week for the club after a contract extension for Manuel Neuer, too: a big performance from him would be fitting but perhaps unlikely against a flat Frankfurt team.

Are Leipzig already playing for pride?

RB Leipzig were top of the table near the end of January and seemed to have the momentum, the quality and the coaching skill to truly challenge for the title. But in their first game back from the shutdown, they did exactly what they did in the two games prior: draw instead of win. Julian Nagelsmann's side appeared to have stalled at exactly the wrong time, and while the break plays a role, they're running out of games to get back into the title race.

With all this in mind, Mainz might fancy their chances. If they can reduce the glaring errors from their spirited draw against Cologne and get another strong performance from keeper Florian Müller, they stand a chance. Perhaps Nagelsmann's team will find another gear and blow Mainz away, or perhaps Leipzig might find themselves with another draw, but the fact that it's not clear which one it will be is worrying for a team that at one point backed themselves to win the title.

Expect goals and another big win from Dortmund: Their 72 goals this season is second in the Bundesliga (Bayern Munich: 75) and third across Europe's Big Five domestic leagues (Paris Saint-Germain: 75), while their knack for creating chances is unrivalled this season: their 82.4% pass completion percentage in the attacking third is the best in Germany's top flight.

They're also a tough team to stop because of their varied attack. Dortmund are one of just four teams in Europe's Big Five domestic leagues -- and the only Bundesliga side -- to boast three different players with 10+ goals, joining Atalanta (Serie A), PSG (Ligue 1) and Manchester City (Premier League). Jadon Sancho (14), Marco Reus (11) and Erling Haaland (10) have been red-hot this season though Reus is set to miss this weekend's game, and possibly the remainder of the season, with an adductor injury.

As for their opponents, it promises to be a long afternoon. Wolfsburg have lost four straight home Bundesliga matches vs. Dortmund (aggregate score: 11-2 BVB).

Will Giovanni Reyna feature? The young American was supposed to make his first career Bundesliga start last weekend vs. Schalke but missed out thanks to an injury during the warm-ups. Already the youngest U.S. player to appear in the Bundesliga (Reyna will be 17 years, 191 days on Saturday), he could add another mark by becoming the youngest American to score in Germany, too: Pulisic was 17 years, 211 days when he did it for Dortmund on April 17, 2016.

Expect Bayern to roll too: Hansi Flick's side have been typically ruthless in the Bundesliga this season. With 75 goals so far in 2019-20, they're just four goals shy of tying the league record after 27 matchweeks, a record they already hold having done it in 2013-14 and 1973-74.

Look out for Havertz: Despite having what is considered a "down" year by his lofty standards, the Leverkusen playmaker has 16 goals/assists combined in 2020, the most by any Bundesliga player heading into the weekend. Can he keep that hot streak going?

Pick Union to win the Berlin derby? It's been a long time since Hertha and Union were able to face off despite being the biggest clubs in the German capital city. Their first competitive game took place in 2010, with Hertha winning 2-1, though Union leads the head-to-head with two wins, one draw and that one defeat in four meetings.

Union are one place below Hertha (12th vs. 11th) but there are several reasons to pick Union this weekend. For a start, Hertha have the third-worst home record in the Bundesliga this season (three wins and three draws in 16 matches) and are having their worst defensive season in recent memory: 48 goals conceded in 26 games is their poorest mark in the past eight seasons.

Leipzig can't afford more dropped points: RB's run of three straight league draws is their longest streak in the German top flight since their arrival in 2016-17, but with Timo Werner up front (21 league goals in 2019-20), you'd be silly to bet against them. Especially because they thumped Mainz 8-0 in their earlier clash back in November.