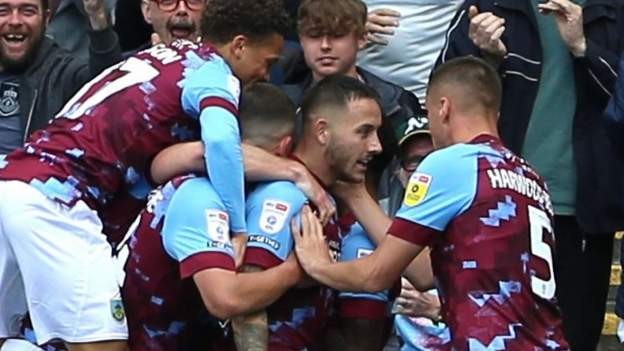 Vincent Kompany's Burnley recovered from the shock of conceding an early goal to earn a draw at home to Luton Town in their second game since relegation from the Premier League.

The Hatters - who reached the Championship play-offs last season - took the lead through defender Dan Potts after the Clarets were unable to clear a corner.

Home fans had to wait until after the break for the equaliser as midfielder Josh Brownhill beat keeper Ethan Horvath with a low shot from outside the box.

It was their only effort on target in the match, and with striker Jay Rodriguez again absent because of a hamstring problem it is a problem Kompany must look to address.

It was Luton, though, who began on the front foot in the first league meeting between the two sides since 2007 and they went in front when Potts converted Elijah Adebayo's knock-down.

The Clarets struggled to find the fluency they showed against Huddersfield and a Brownhill shot which flew wide was the closest they came before the interval - a warning to Luton that they must not give him time and space around the box.

The second half was only five minutes old when Ashley Barnes played the ball to Brownhill just outside the box and this time the midfielder's drive found the bottom corner.

Barnes was too high with a header as Brownhill tried to return the assist favour and new signing Marcel Benson, on as a substitute, shot over from 12 yards.

Luton boss Nathan Jones made a switch in personnel, sending on Carlton Morris and Cauley Woodrow, two strikers both signed from Barnsley, but Morris was shown a yellow card for a foul on Maatsen.

It was Jordan Clark who produced their best effort of the second half, saved by Aro Muric, and they have begun the new campaign with two draws.

Ethan Horvath (Luton Town) wins a free kick in the defensive half.

Connor Roberts (Burnley) wins a free kick in the defensive half.

Amari'i Bell (Luton Town) wins a free kick in the defensive half.

Charlie Taylor (Burnley) wins a free kick in the defensive half.

Henri Lansbury (Luton Town) wins a free kick in the defensive half.

Attempt saved. Jordan Clark (Luton Town) right footed shot from the left side of the box is saved in the bottom left corner. Assisted by Elijah Adebayo.

Attempt missed. Ashley Barnes (Burnley) left footed shot from the centre of the box misses to the left.