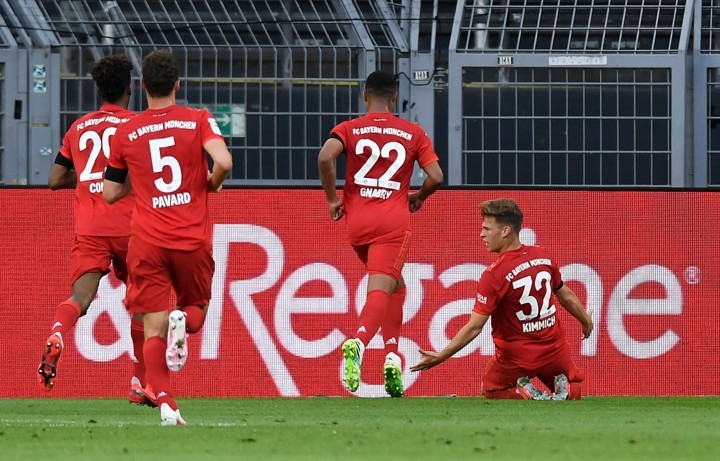 Game is over and the final score is Dortmund 0-1 Bayern. Here is the match report.

Dortmund are straight on the attack! Neuer races from his goal to beat Hazard to a ball in behind, but Haaland pounces. From the edge of the area, the young striker nutmegs Neuer with pinpoint accuracy, only to find his slowing strike stopped on the line by Boateng.

A glorious switch gets Guerreiro in behind on the left, and he cuts a pass back into Brandt's path. Haaland is in the centre, but Brandt goes for an ambitious 20-yard curler and picks out only the goalkeeper.

10' Disallowed! Guerreiro scores but the goal is offside

Dortmund have the ball in the net, but it won't count. A wonderful move creates space for Hazard down the right, with Davies dragged out of position, and he picks out Haaland. A low shot is blocked by Alaba, as is Hakimi's follow-up, but the ball spins back to Hazard. Hazard is offside, however, as he centres for Hakimi to head in.

Kimmich lofts in a beautiful ball that drifts just over Muller's head. Muller was stood in front of the goalkeeper, who collected but would have been stranded had the striker got a touch.

Bayern almost have the lead! Coman's low cross from the right finds Gnabry completely unmarked in the centre. His shot beats Burki, but Piszczek recovers to clear and get the ball away from the lurking Lewandowski.

Haaland races away from Alaba, but the left-back appears capable of recovering from anywhere on the pitch with his pace. One scruffy touch from the striker lets Davies in.

No risks from Burki! He punches clear as Goretzka thunders in a 20-yard shot following a poor Hakimi header.

The visitors have Dortmund on the back foot, and Kimmich picks up possession when Davies' pass is cut out. He moves forward and, spotting Burki off his line, lifts a delicious chip over the goalkeeper into the top-left corner. Burki gets a hand to the ball but cannot turn it over the crossbar.

54' SAVE! Fine stop from world-class Burki

Crucial stop from Burki! And then Hummels to the rescue! Dortmund are hanging on! Goretzka shoots low and Burki parries, only for Gnabry to gather the ball and dart into the area. A square pass appears to give Lewandowski an open goal, but Hummels intervenes brilliantly.

58' No pen! Haaland shot blocked by Boateng's arm in the box

Hazard collects on the left-hand side of the area and squares to Haaland, who controls as Boateng slips. The striker has a clear shot at goal but shoots against the prone defender. The ball spins behind, having appeared to catch Boateng's arm, but there is no penalty and no appeal.

Reyna is on for Dortmund, and there might be concern for Haaland, who makes way. The striker is moving awkwardly after stretching for a Sancho cross.

The striker shapes to shoot and sees a low curler deflect off Hummels and against the post. Gnabry hacks over the top on the rebound.