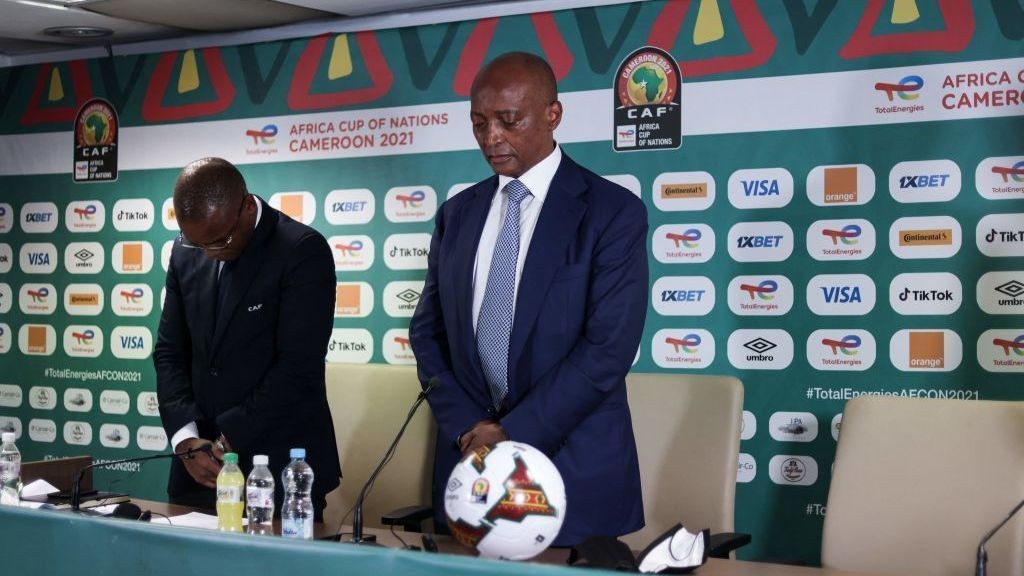 Confederation of African Football president Patrice Motsepe says the continent's governing body will take responsibility for the deaths of at least eight people at the Africa Cup of Nations in Cameroon.

A crush at the gates of the Olembe Stadium on Monday night, during Cameroon's round-of-16 match against Comoros, saw dozens taken to hospital in Yaounde, while the death toll rose from six to eight on Tuesday. Supporters were trampled when a stadium barrier at the south entrance gave way as fans tried to pour into the stadium.

At a news conference at the Ahmadou Ahidjo Stadium in Yaounde on Tuesday afternoon, Motsepe said it was CAF's responsibility to ensure the safety of all fans at their events.

The South African billionaire, who stood with his head bowed in a moment of silence ahead of the news conference, said he will host a meeting with the Cameroonian Organising Committee on Wednesday in order to understand the circumstances surrounding the tragedy.

Motsepe said: "Legally, the organising committee are responsibility for safety and security, but we're their partners, and we have to make sure of it. The last thing I'm interested in is saying that it's someone else's responsibility and not mine.

The Mamelodi Sundowns owner added: "When people lose their lives, you must be angry, impatient, ask questions and demand guarantees that it will never happen again.

Confederation of African Football (CAF) President Patrice Motesepe observes a minute of silence in the wake of the deadly events at the Africa Cup of Nations on Jan. 24. KENZO TRIBOUILLARD/AFP via Getty Images

Motsepe also confirmed that there would be a moment of silence to honour the victims at the 13 matches still to be played at the AFCON, while Sunday's quarterfinal that was due to be played at Olembe will now be played at Ahmadou Ahidjo Stadium.

"We have a duty to find out what happened and to put in preventative measures to ensure that what happened never happens again," he continued. "Clearly there were deficiencies, failures, weaknesses, things that should have been foreseen.

"We must make changes to avoid the circumstances that can lead to such a situation."

The 60,000-capacity stadium had been capped at 80% for COVID-19 restrictions introduced ahead of the competition, but that did not deter supporters from arriving en masse to support the tournament hosts.

ESPN witnessed people on stretchers being transported out of the stadium by Red Cross medics as late as 11:30 p.m. local time -- three and a half hours after kickoff -- while some supporters caught up in the crush were moved to the players' medical room to receive treatment during the fixture.

The CAF announced in the hours after the disaster that they were launching an enquiry into the incident, while Cameroon head of state Paul Biya announced in a statement on Tuesday that a government investigation would also begin to establish the circumstances around the tragedy.

"I am confident and continue to be confident that the government of Cameroon is 100 percent committed [to ensuring safety]," Motsepe said, "and I have no doubt I'll get their commitment until the end. I have a fundamental duty as CAF president to ensure that facilities, infrastructure and safety at the stadiums are in line with standards worldwide; we can't say that Africa is lower than global standards.

"Whether it's safety or security, we have to ensure we're in line with Europe and worldwide."

Motsepe sent CAF general secretary Veron Mosengo-Omba to visit victims in a Yaounde hospital on Monday evening, and both were understood to be present in a CAF meeting on Tuesday morning to discuss whether the tournament should proceed.

Monday's deadly stampede comes in the aftermath of a nightclub fire in the capital on Saturday evening that claimed the lives of 17 people.

It is the latest in a long string of stadium disasters to have befallen the continent.

In Motsepe's own South Africa, the Oppenheimer Stadium disaster of 1991 and the Ellis Park tragedy a decade later -- which took a combined 85 lives -- cast a dark shadow, as have similar incidents at the Accra Sports Stadium in 2001 (127 casualties) and the Stade Houphouet-Boigny in Abidjan in 2009 (19 casualties).

Egypt has also been hard hit by tragedy, with 74 deaths in the Port Said Stadium disaster of 2012, three years before 28 lives were lost at the 30 June Stadium in Cairo in a league game between SC Zamalek and ENPPI.