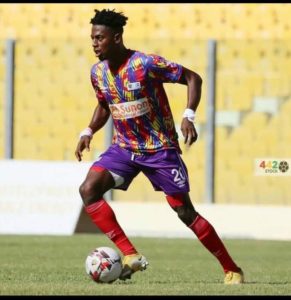 Hearts of Oak midfielder Enock Esubonteng is optimistic his side can progress to the next stage of the CAF Champions League as they come against Wydad Athletic Club.

The Ghana Premier League champions defeated Guinean side CI Kamsar to set up the clash with Wydad of Morocco in the second preliminary round which will be played next month.

Enock Esubonteng who made his debut for the Phobians against CI Kamsar is confident the team can deliver against the North African side.

“We've done well in big games, against big opponents and it's another chance for us to go out there and show what collectively we've got and what we're about”.

“The way we've started, I can only say we need to go into the game full of confidence.

The WAC team is a very good side, full of quality players judging from the matches they’ve played so far in their league and we know the dangers they can cause, but we'll be ready for them because we have to work well to defend the image of our club-Hearts”. He told Heatsofoaksc.com.