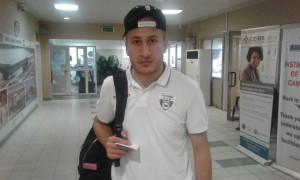 Skipper of Algerian club MO Bajaia, Zahir Zerbdad has revealed the side’s intention for their clash with AshGold in the CAF Champions League game on Sunday at the Len Clay Sports Stadium, insisting they will be hoping for a draw.

The Algerians will be testing their faith against the Ghanaian champions as it appears a won battle for the Obuasi-based side.

Bajaia will be the first North African side to pick a win against AshantiGold after several clubs including Club Afrcain, Zamalek, Raja Casablanca and Etoile Du Sahel failed to register wins at the Len Clay Stadium.

Having this at the back of his mind, captain Zahir Zerbdad has revealed that his side will be satisfied with a goalless draw on Sunday.

“We don’t know much about AshGold but we know they are a very good side. We will try to win here but a goalless draw will be very good for us,” Zahir told Ashh FM in Kumasi.

“This is the beginning of the Champions League matches and we hope for a good score line. Getting a goalless draw will brighten our chances because we have the advantage of playing the second leg at home,” he added.

Both team will position themselves well ahead of the second leg with the scoreline of Sunday’s clash.