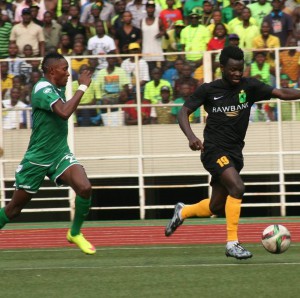 Former AshantiGold midfielder Bernard Morrison says he is worried after missing a penalty in his CAF Champions debut despite his side's 3-0 win over Tanzanian side Mafunzo FC.

Morrison assisted twice to help AS Vita Club cruise to the massive win away in Tanzania ahead of the second leg in a fortnight.

The Congolese side opened the scoring in the early minutes of the game after Bernard Morrison's through pass was well connected by Chico Ikanga under three minutes.

The Ghanaian made the second assist to fetch the second goal for the visitors when he located Ngudikama Emmanuel at an advantageous position who had only the goalkeeper of the home side to beat.

But the ambitious midfielder says he is worried he could not score on his debut Champions League game.

"I was sad for missing the penalty because I wanted to score in my Champions League debut."

"It had always been my dream. So when the penalty came, I knew my dream will come true," Morrison exclusively told GHANAsoccernet.com

The 24-year old however consoled himself with the win of his side and the fact that he provided two assist in the game.

"I am however happy that I made two assists to help my team to win," he added.

AS Vita Club will welcome the Tanzanian side at the Stade Tata Raphaël in Congolese capital, Kinshasha, in two weeks time.