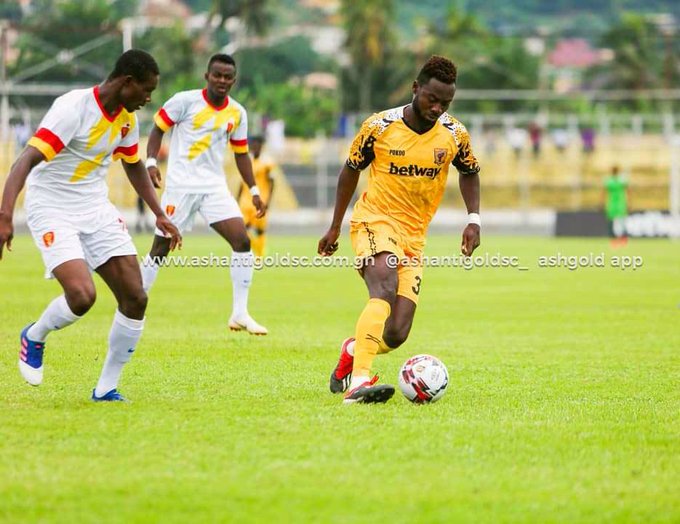 Experienced Ashantigold defender Eric Donkor is very sure of victory against Akonangui FC ahead of their second leg clash in the preliminary stages of the CAF Cofederations Cup.

The Miners drew 1-1 with the Central Africans in the first leg in Ebebiyen a fortnight ago.

"It was a good away result for us in the first leg and we are happy about it, though I personally feel we should have won the game looking at our performance," the ex-Asante Kotoko player is quoted as saying by cafonline.com.

"We are still preparing for the game with one thing on our minds, and that is to beat Akonangui and qualify to the next stage of the competition.”

The "Aboakese" lads welcome the return of inspirational forward Shafiu Mumuni to the squad after missing the first leg.

Donkor believes the striker presence can make the difference in the game on Saturday at the Len Clay sports stadium.

“Mumuni (Shafiu) is an inspiration to the team. He manages to lift the team up when the going gets tough and his presence will add more bite to our play upfront in Saturday’s game,” Donkor stated.

A win or a goalless draw will see the Ghanaian side progress to the next stage of the competition.

"We are not out of the woods yet. We still have to qualify and winning on Saturday is the only way. The draw in Equatorial Guinea has boosted our morale because even before that game, we knew nothing about them. Now we have a fair idea of the side we are dealing with. There's nothing to be complacent about, all we know is that we have to win and make our fans very happy," Donkor assured fans.