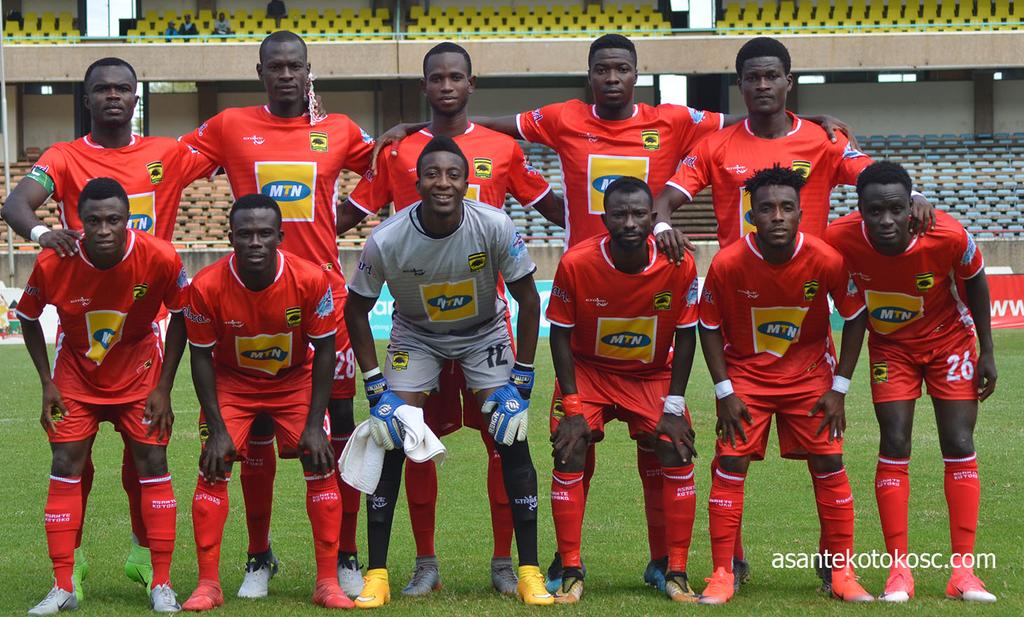 Follow the LIVE play-by-play of the CAF Confederation Cup showdown between Asante Kotoko and ZESCO United at the Baba Yara Sports Stadium on GHANAsoccernet.com

Asante Kotoko will be aiming to pick their first win in Group C after losing 1-0 to Al Hilal in the opening fixture of the group last week while a victory for the Zambians today will help consolidate their lead at the summit of the pile following their 2-0 victory against rivals Nkana FC on matchday one.

The Porcupine Warriors are unbeaten at home in the history of the CAF Confederation Cup.

Their records at home stands a total of 14 games – 12 Wins and 2 Draws while ZESCO United are also unbeaten in this years competition.

But they lost 2-0 to Medeama in 2014 which happened to be their last trip to Ghana.

Asante Kotoko Coach, C K Akonnor has no injury concerns to worry about.

All the players are in contention to play should the coach select them.

Meanwhile, ZESCO welcome back captain and goalkeeper Jacob Banda who missed the win over Nkana to serve a one-match suspension.

Midfielder Enock Sabamukumana is also back following his recent recovery from an injury he sustained on the eve of ZESCO’s Confederation Cup pre-group stage first leg match against Kaizer Chiefs in Ndola on January 13.

The Zambians haven’t lost to any West African side in their last five matches.

Experienced Moroccan referee Noureddine El Jaafari, will be assisted by compatriots Hicham Ait Abbou and Youssef Mabrouk as first and second assistant referees respectively while Samir Guezzaz takes charge as the fourth official for the day.

Rwandan Aaron Rurangirwa has been appointed as the Match Commissioner while IIboudo Serge Paulin Samuel from Burkina Faso will be the Referee Assessor.

The two teams are on the pitch now with CAF’s anthem being played.

Players of both teams are warming up as hey awaits instructions from the Moroccan official to kick-start the game.

It seems something is not right with the colour of ZESCO United goalkeeper’s jersey hence he’s been asked to change.

Moroccan referee Noureddine El Jaafari has blown his whistle for the game to start.

01: Free kick to the visitors after Fatawu Safiu nudged David Owino off the ball.

02: Asante Kotoko broke free with Sogne Yacouba and Emmanuel Gyamfi but the latter’s final could not find the Burkinabe.

03: ZESCO are looking jittery at the moment and goalkeeper Banda nearly dashed Kotoko a goal but Fatawu Safiu’s low shot goes off wide.

04: Corner kick to ZESCO, what can they do with their maiden chance in the game?

05: Kotoko are probing for the opener but their final balls leaves much to be desire.

07: Kotoko are stringing their passes together nicely but only in the middle of the park.

08: Gooooooooooooal! Fatawu Safiuhas broken the deadlock for Kotoko. Yacouba played a major role in the goal.

10: Yacouba who provides the goal has missed a sitter here. Safiu set him with a gaping goal but his shot goes just wide. Game on!

14: Kotoko are controlling the tempo of the game nicely. The visitors are all over the place.

16: Maxwell Baako was presented with a fine chance to whip in a cross but his tame effort did not trouble Banda in ZESCO goal.

17: Penalty for ZESCO United. A clumsy challenge from Agyemang Badu.

19: Felix Annan dives to save the penalty. Great save by the former WAFA custodian.

21: Though ZESCO United are are down, they are looking very confident on the ball. Kotoko have a real game on their hands.

24: Gooooooooooooal! Emmanuel Gyamfi scores Mbappe-like goal for Kotoko. 2-0. ZESCO defenders were caught ball watching as raced past them to tap into an empty net.

26: Kotoko are pushing for the insurance goal now but their promising attack did not yield as the visitors clear their line.

33: The game has been temporarily halted as ZESCO United Clement Mwape is wailing on the deck with a suspected injury after a bad tackle from Yacouba. Yacouba has been shown a yellow card.

35: Game resumes as ZESCO are trying to build play from the back the sturdy defense of Kotoko are keeping them at bay.

36: ZESCO nearly pulled a goal back after a fantastic work but goalkeeper Annan proved to be a stumbling block once again by picking the last ball. Superb work there by the youngster. He is keeping the hosts in the game.

37: ZESCO are showing great conviction but they are lacking the final ball to overcome the spirited Annan in Kotoko goal.

39: The game is on hold as Teddy Akumu collides with Agyemang Badu on the touch line. The medics are attending to him.

41: The match resumes. ZESCO are ready to initiate the free kick.

43: Yacouba fluffs a big chance to put the game beyond the visitors. His composure let him down there.

44: Annan saves Kotoko again. He nicely read a defense splitting pass from the visitors and made a hurried clearance.

45: Two minutes of injury time has been added on.

The first stanza of the game has been brought to a close by the Moroccan referee. Asante Kotoko 2-0 ZESCO United.

We’ll be back for the second half....

Welcome back from recess.

45: Kotoko have started from where they left off in the first half as Yacouba nearly registered his name on the score sheet but he blasted his shot straight into the waiting arms of goalkeeper Banda.

47: ZESCO have taken charge of the game now and are stringing their passes superbly but not making any incursion to hurt their opponents.

49: Yacouba almost made it 3:0 for the hosts but a last ditch tackle from James Were saved his side’s blushes.

54: Another chance goes begging for ZESCO. Mtonga has a fine chance to reduce the deficit for the visitors but blasted his shot wide.

56: Gyamfi nearly extended the Porcupines lead but Banda stood up to the task by parring the ball over to corner.

57: Foul against Kotoko. Yacouba almost set up another goal for Kotoko after racing clear off his marker but the final ball was cleared by Phiri.

59: The game is end to end stuff now. Yacouba is looking desperate to get his name on the score sheet but his shot flies into the sky.

60: The has turned into a ding-don affair now as both sides are just knocking the ball around.

67: Kotoko are keeping possession nicely now as the clock whines down.

69: Free kick and yellow card for Silwimba. He was beaten by the pacey Gyamfi before grasping his shirt. Can Kotoko utilize the dead ball this time around.

71: Yacouba fires another shot wide. It looks like he wants to break his duck in the competition.

72: Goooooooal: Osmanu pulls a goal back for the visitors. Annan misjudged his run there. 2-1. It’s game on!

75: Nice through ball from Safiu but Banda read the situation well.

77: The game has been put on hold as Senanu lies on the turf. The players are calling for a substitution there. It seems he is serious pain.

82: Corner for ZESCO: What can they do with it?

84: Great save by Annan again. Osmanu climbs high to head a free ball but Annan parries his effort off the bar. Annan might have picked a win for Kotoko with that save.

88: An infringement to Kotoko after Baako was bundled off the ball.

90: Red card for Kondwani Mtonga for a stamp on Baako.

Three minutes of injury has been added on.

Kotoko are now trying to wind down the clock but have rather played the ball to the hands of the visitors.

It’s all over as referee El Jaafara blows his whistle to end proceedings. Kudos Asante Kotoko!