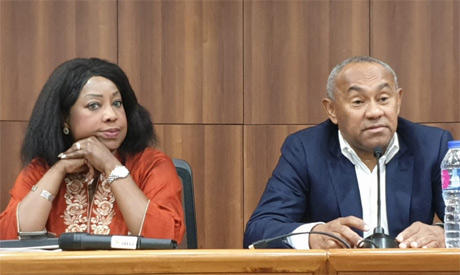 The Confederation of African Football (CAF) has hailed the court ruling to reject Lagardere's request to be reinstated as the exclusive media and marketing partner of Africa's football ruling body after it cancelled their 20-year US$1 billion contract.

CAF said, with the support of FIFA, it will continue to protect the interest of ordinary African football fans who were completely priced out of watching the continent's key competitions because of the controversial 20-year contract.

CAF vowed that it will continue to pursue an agenda of injecting transparency in its operation as part of the reforms process in partnership with FIFA with is meant to clean up the image of African football governance.

The ruling is a major victory for CAF President Ahmad Ahmad and the FIFA  team led by Madam Fatma Samoura as it offers the Cairo-based body an opportunity to win public confidence by opening a transparent bidding process and a better deal to improve CAF’s revenue base.

Lagardere signed the contract under the leadership of Issa Hayatou for an uninterrupted 20-year period without any open tender which led to astronomical price hikes, making it impossible for majority of African fans to watch tournaments such as the Africa Cup of Nations. 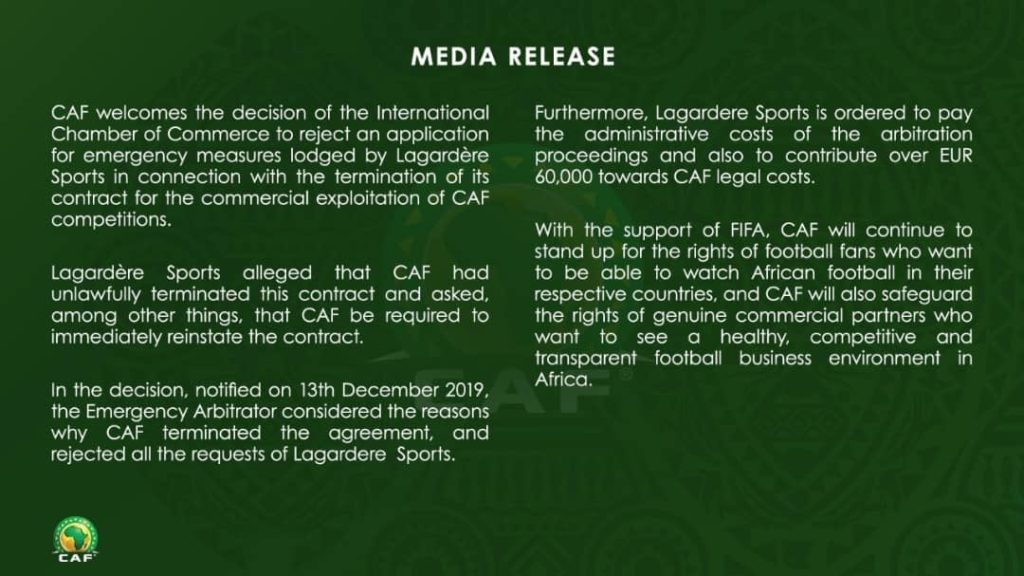 CAF statement
The ICC disagreed with Lagardere and ruled that CAF had no choice but to cancel the deal the contract signed under controversial circumstances after two major court judgments went against it.

"CAF welcomes the decision of the International Chamber of Commerce to reject an application for emergency measures lodged by Lagardère Sports in connection with the termination of its contract for the commercial exploitation of CAF competitions," CAF said in a statement on Saturday.

"In the decision, notified on 13th December 2019, the Emergency Arbitrator considered the reasons why CAF terminated the agreement, and rejected all the requests of Lagardere Sports.

"Furthermore, Lagardere Sports is ordered to pay the administrative costs of the arbitration proceedings and also to contribute over EUR 60,000 towards CAF legal costs.

"With the support of FIFA, CAF will continue to stand up for the rights of football fans who want to be able to watch African football in their respective countries, and CAF will also safeguard the rights of genuine commercial partners who want to see a healthy, competitive and transparent football business environment in Africa."

The 12-year agreement, which CAF and Lagardere signed in 2015, and extended beyond its initial eight years in 2016, handed over CAF’s media and sponsorship sales rights globally until 2028, including the Africa Cup of Nations, the Africans Nations Championship, and the CAF Champions League.

CAF and Lagardère announced the “landmark” agreement (an extension of a previous deal running from 2009 to 2016) in the middle of 2015 under then CAF President Issa Hayatou who said that CAF had “appreciated and is very satisfied” with the agency’s performance.

However last year a Cairo court ruled that the agreement signed under Hayatou breached Egyptian competition rules because Lagardere was appointed as CAF's exclusive agent for marketing and media rights for an uninterrupted 20-year period without any open tender.

The Competition Commission of the Common Market for Eastern and Southern Africa (CCC) had also found in 2017 that the agreement infringed competition regulations.

The deal has long been a controversial one after coming under pressure from competition probes and the cancellation is seen by many as CAF’s latest move designed to clean up the image of African football governance.