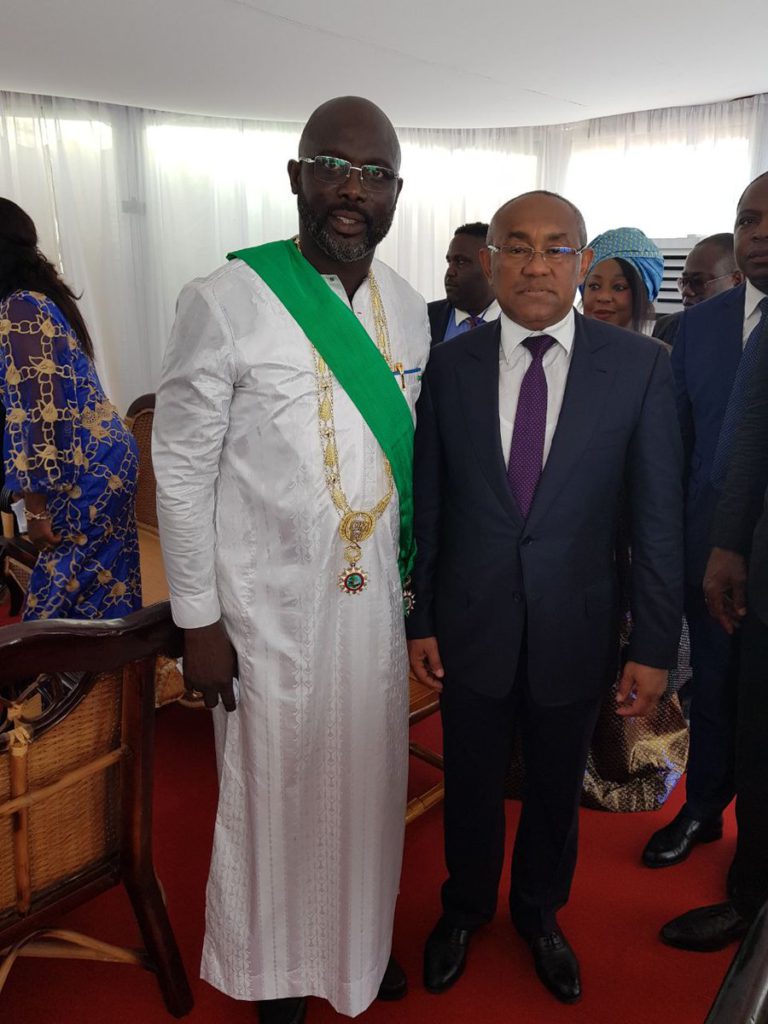 CAF President Ahmad Ahmad led a high-powered African football delegation to Monrovia on Monday as massive show of support for George Weah during his inauguration as the new President of Liberia, cementing the new direction of the game in the continent where former players are playing key roles.

The presence of Ahmad and all his top executives from Africa’s football governing body as well as FIFA General Secretary Fatma Samoura, who is from Senegal, as well as some of the top legends of the game African shows how former players have become key actors of the game.

They were joined by former African players were in Monrovia for Weah’s swearing-in with Ivory Coast and Chelsea legend Didier Drogba, Cameroon’s Samuel Eto’o and Nigeria trio of Jay Jay Okocha, Sunday Oliseh and Taribo West, demonstrating the big support from the African football community. 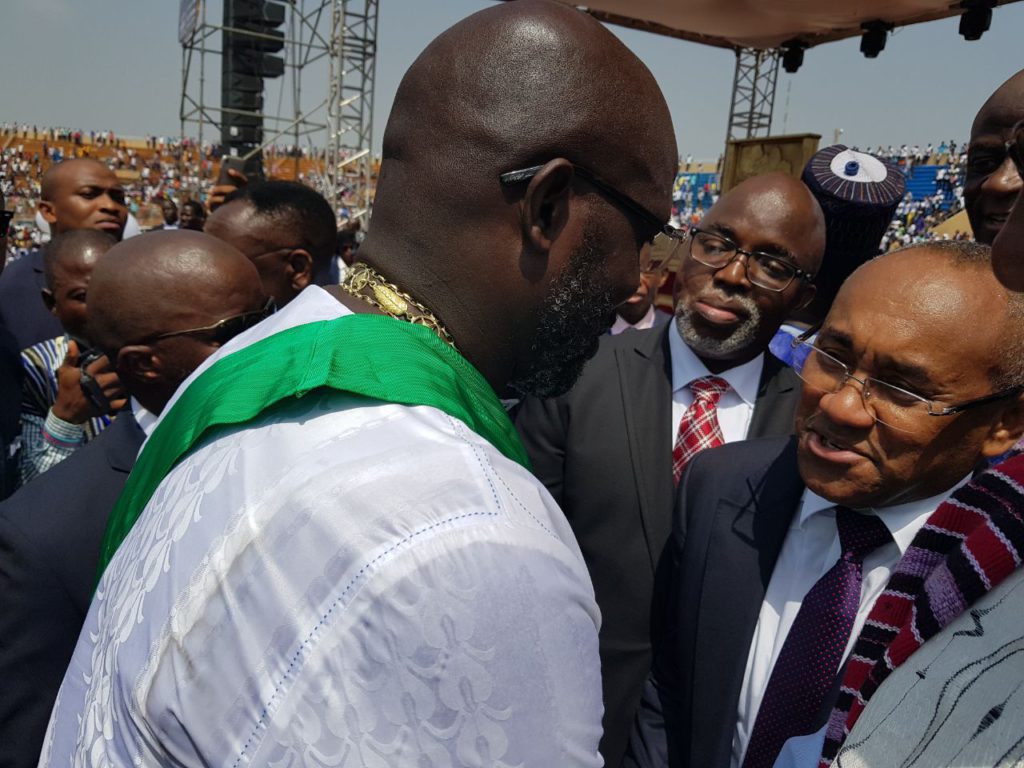 Weah and Ahmad exchange pleasantries
This came just three weeks after CAF honoured Weah with the body’s highest award at the CAF awards held in Ghana for his immense contributions to the game in Africa- being the only person from the continent to win the FIFA World Footballer of the Year award.

Weah finally won the presidency after three straight attempts. HE lost to candidate Sirleaf in 2006 when he stood as a candidate. He won the main vote and lost the run-off.

In 2011, he partnered a former U.N.-executive, Winston Turnbull, but in the capacity of vice-presidential aspirant, that ticket was unsuccessful as Sirleaf won a second term.

Weah is now Liberia’s President – the first African footballer to achieve that feat while Ellen Johnson Sirleaf – Africa’s first democratically female president will leave office after over a decade in charge.

He won presidential elections last year to emerge the successor to Sirleaf beating then vice president Joseph Boakai twice in a space of three months.

In the first round of voting in October 2017, Weah came top but failed to garner the necessary votes. He went into a runoff with Boakai in December and emerged winner with over 60% of votes cast to put the former footballer in charge in Liberia and it was not surprise that the African football fraternity turned up in numbers to support the former African Footballer of the Year award winner. 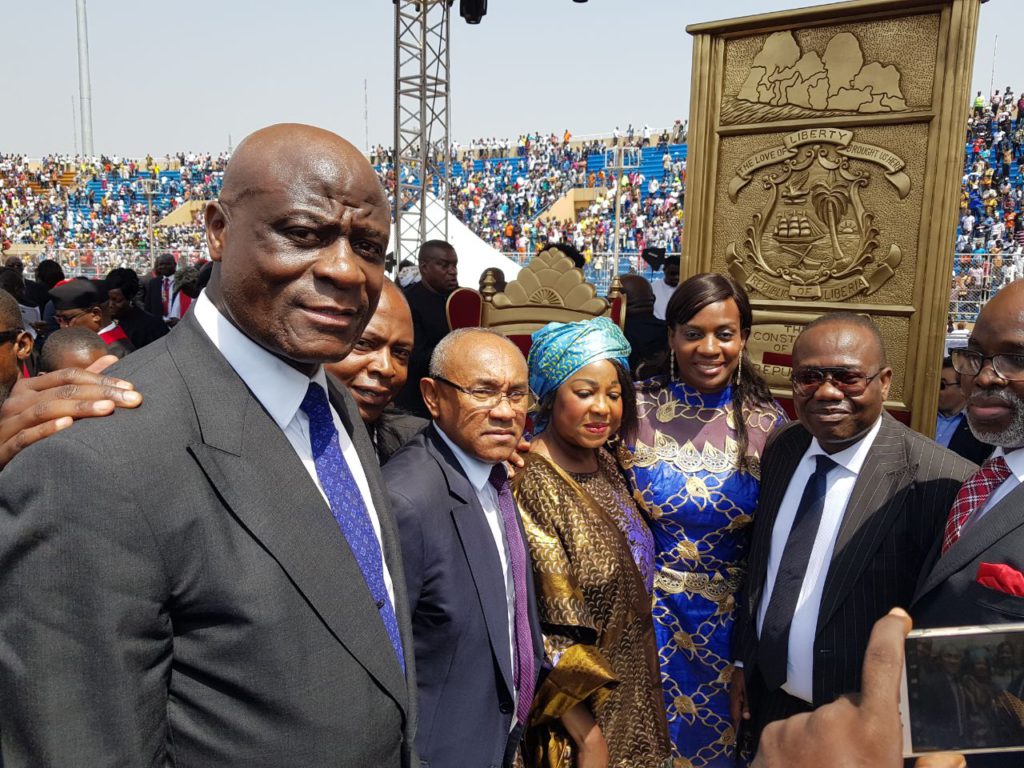 African football leaders delegation to the Weah swearing-in with the former player's wife
The recent collaboration between CAF and the key former players who made African’s football reach its current heights is the result of the policy of Ahmad to include the legends in the affairs of the game on the continent which had not been done in the past.

The growing synergy between African football legends and CAF took off when Ahmad swept to office in March last year after defeating the long-standing leader of Africa’s football governing body Issa Hayatou.

While Hayatou has been credited for some of the progress Africa football following his 29-year grip on power, he has equally been slated for the way legends were treated under his reign with most ostracized for voicing their opinions on the game on the continent.

Now in just under one year since Ahmad took charge of CAF, legends have been key part of the body as they were invited to brainstorm on the future of African football at the CAF Symposium in Morocco which formed the basis of the reforms African football us undergoing. 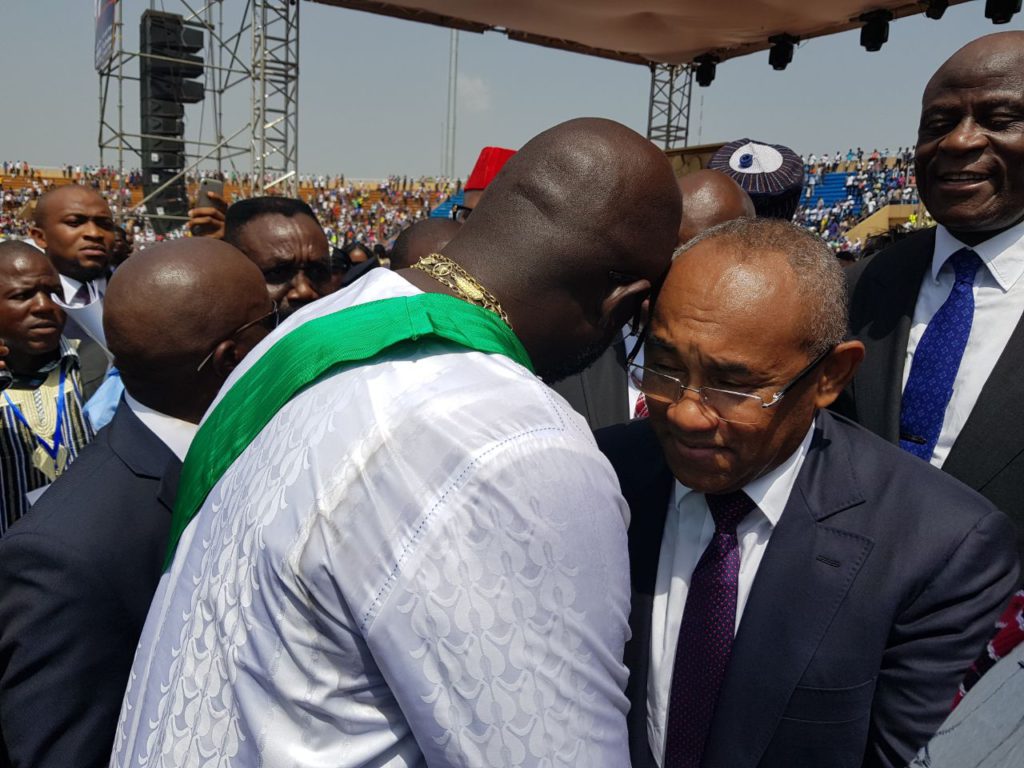 Ahmad is a hearty greeting with George Weah during the inauguration
For the first time in the history of African football, a former footballer Anthony Baffoe has risen to the second highest position in the administrative bodies of CAF. Deputy General Secretary of CAF Anthony Baffoe, is a former Ghana defender – while many former players are serving in various committees of CAF- the highest number of legends serving the continental governing body.

With this development, retired African footballers can now aspire to reach the heights of Weah with the support of an openhearted CAF leadership or in the least serve the continental body or local football federations in various capacities.