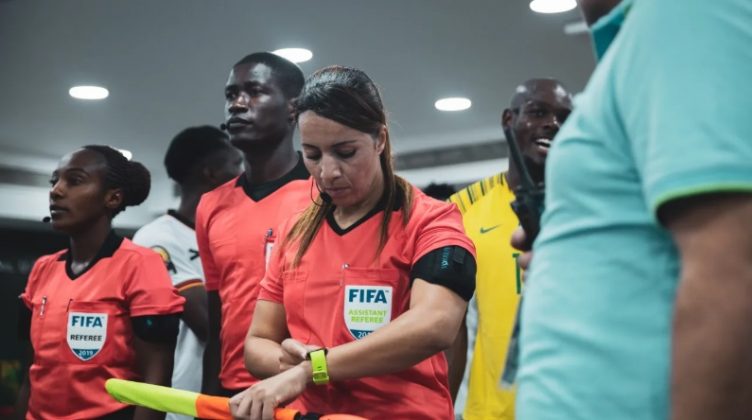 Rwanda’s Salma Mukasanga (far left) and Morocco’s Fathia Jermoumi (centre) prepare to walk onto the pitch ahead of the Under-23 Africa Cup of Nations match between South Africa and Zambia at the Al Salam Stadium in Egypt on Saturday, November 9 2019. COURTESY: CAF

The Confederation of African Football (CAF) President Ahmad Ahmad is happy with the participation of female officials in the ongoing Africa U23 Cup of Nations in Egypt.

A female referee took charge of a game at the Under-23 Africa Cup of Nations for the first time in the tournament’s history on Saturday as South Africa and Zambia drew 0-0 at the Al Salam Stadium in Egypt.

Rwanda’s Salma Mukasanga officiated the match and was assisted by Morocco’s Fathia Jermoumi.

CAF President Ahmad Ahmad praised the duo for their professional handling of the game after the match.

“This is a historic day for African football, especially officiating, and I congratulate you on the wonderful performance today. You gave a good impression and everybody at the stadium including both teams were happy with your performance,” Ahmad said.

The coaches of South Africa and Zambia, in their post-match interviews, lauded both officials for their performance and the decision to give more women a chance at officiating men’s games in Africa.

“Today’s referee is a qualified one and I think she did a great job. I believe this is a fantastic decision from CAF and we have to promote and support such initiative,” South Africa’s David Notoane said.

“Having a female referee is a good initiative and it needs all our support. Today’s referee had a good game and this is good for football,” Beston Chambeshi of Zambia said.

This match marked the second time in the history of the CAF that a female referee oversaw a men’s match. The first time was in April this year during the Under-17 Africa Cup of Nations staged in Tanzania.

Tanzania’s Jonesia Kabakama refereed the Group B match between Cameroon and Senegal in Dar es Salaam, which, incidentally, also ended in a barren draw.

Kenya’s Mary Wanjiru Njoroge and Lidwine Rakotozafinoro of Madagascar were also among three women out of the 29-match officials listed for the tournament.