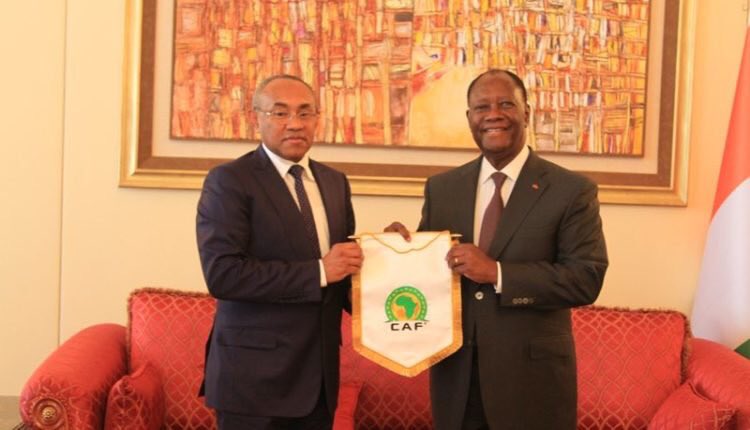 CAF President Ahmad put on display his hidden diplomacy skills to ensure that the confusion that surrounded the future hosts of the Africa Cup of Nations what resolved peacefully.

This comes after Ivory Coast this week agreed to host the African Cup of Nations tournament in 2023 instead of 2021 after the head of the continent's soccer body travelled to meet with Ivorian President Alassane Ouattara to broker a deal.

Cameroon lost the 2019 tournament because of poor preparations and security concerns, sparking anger among the central African country and their allies which threatened the reign of Ahmad.

Egypt will be the stand-in host for this year's African Cup, which is in June and July and is the first to be increased from 16 to 24 teams.

The change and uncertainty surrounding the future hosts of Africa's flagship competition threatened to cause serious ructions with the rank and file after several legals challenges over the standoff.

That's because the decision to withdraw the tournament from Cameroon also put Ivory Coast and Guinea's hosting of the 2021 and 2023 editions in danger as they were also thought not to have met the milestones ahead of their hosting of the competition.

This ebbed away support for Ahmad leadership that sparked multiple Court of Arbitration for Sport (CAS) from the federations in Cameroon and Ivory Coast with the Guinea threatening similar action.

While some of the FA Presidents were plotting to fight CAF at CAS, Ahmad moved above and beyond the federations met the leaders of the three affected countries to solve the problem.

Ahmad's soft and diplomacy skills were at play as he moved to engage them to explain the decision and win their support to seek a common solution which led to the meeting with the Ivorian President Ouattara to broker the deal.

CAF announced the arrangement on Wednesday after the soccer body's head, Ahmad, met with Ouattara and other Ivory Coast government officials.

Ahmad, who goes by one name, also previously met with the presidents of Cameroon and Guinea.

During the meeting with President Ouattarra, Ivory Coast has agreed to host the AFCON in 2023 instead of 2021.

It allows CAF to re-shuffle the next four African Cup hosts so that Cameroon, which was stripped of the right to hold this year's tournament, can now stage the event in 2021.

This means after Ahmad's meeting with Cameroon President Paul Biya, the central Africans have been appeased by the chance to host in two years.

Ivory Coast will delay its hosting by two years and Guinea, initially chosen as 2023 host, will have the tournament in 2025.

The agreement appears to have avoided a legal challenge by the Ivory Coast Football Federation, whose officials were angered when Ahmad announced Cameroon as 2021 host without first getting the Ivorians' approval.

This shows that Ahmad had to dig deep and use his diplomacy skills to solve the problem, demonstrating that the CAF boss has got the much needed tact to lead Africa's football governing body.

Egypt will be the stand-in host for this year's African Cup, which is in June and July and is the first to be increased from 16 to 24 teams.