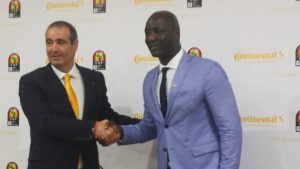 The Africa Cup of Nations received a massive boost on Monday when German tire manufacturers Continental were unveiled as sponsors for the competition.

The Confederation of African Football (CAF) signed a five-year contract until the 2023 Africa Cup of Nations.

The agreement sees the Continental taking over the title name of the Best Goalkeeper Award at the Africa Cup of Nations.

Continental will also fit the team buses of all 24 teams at the 2019 Afcon similar to what the German company with its sponsorship of some football competitions.

This often forms the traditional backdrop of TV reports presented during World Cups and European Championships, with these premium bus tires on all axles before the start of the 2014 FIFA World Cup.

This is the massive boost for CAF as major global companies enter the frame of sponsoring Africa's flagship football competition after recent changes to tournament that makes it attractive globally.

Since those changes Visa and 1Xbet have joined in as sponsors with further more expected to join Africa's football governing body in sponsoring their events.

This is the first time Continental are venturing into African football having been involved with Fifa, Uefa and AFC.

The massive sponsorship deal is another huge success for Ahmad who wants to make confederation and its products attractive.

Continental's first involvement as a football sponsor was in 1995 with UEFA Champions League and since then the tyre company has extended its engagement to international football.

Including national teams as well as world-class football competitions such as UEFA qualifier, UEFA EURO and of course the FIFA World Cup, Continental sponsoring has come a long way.

The tyre manufacturer and automotive supplier company, one of the world's largest, first participated in the FIFA World Cup in 2006 and then again in 2010 to increase brand awareness on a global scale.

Continental has always been synonymous with the combination of controlled thrill and safe defence. Just as football itself, we guarantee breathtaking moving performance with a perfect strategy.