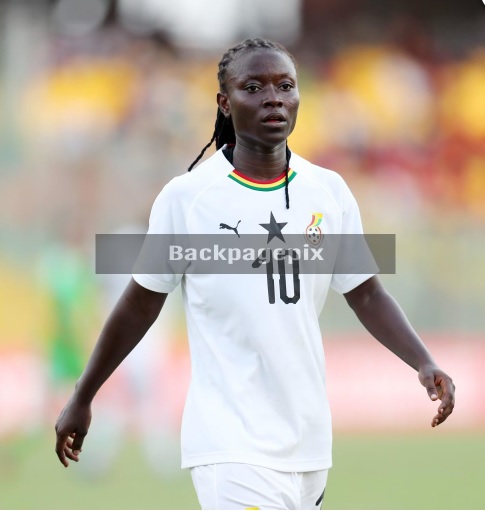 Elizabeth Addo of Ghana during the 2018 TOTAL African Womens Cup of Nations match between Ghana and Algeria at the Accra Sports Stadium, Accra on 17 November 2018 ©Muzi Ntombela/BackpagePix

Ghana duo Mukarama Abdulai and Elizabeth Addo are both in the running for the 2018 CAF Women's Player of the Year award.

Abdulai emerged topscorer at the 2018 FIFA U17 Women's World Cup and also won bronze ball after the tournament.

The youngster scored 12 goals in 4 games during the qualifiers for Ghana.

Addo, the skipper of the Black Queens had a formidable campaign with Seattle Reign FC and was a delight to watch during the 2018 Women's AFCON in Ghana last month.

She was named in the tournament's best XI.

South Africa's Chrestinah Thembi Kgatlana who plays for Houston Dash in the United States is highly tipped to crowned Queen of African Football.

The shortlisted nominees were decided by votes from the members of the CAF Technical & Development Committee.

The final phase will involve votes from CAF Media Experts, Legends, Coaches of the quarter-finalists of the CAF Champions League and CAF Confederation Cup, and Coaches & Captains of the 54 Member Associations.

The Awards Gala will be held on Tuesday, 8 January 2019 in Dakar, Senegal.

CAF 11-man shortlist for Women’s Player of the Year