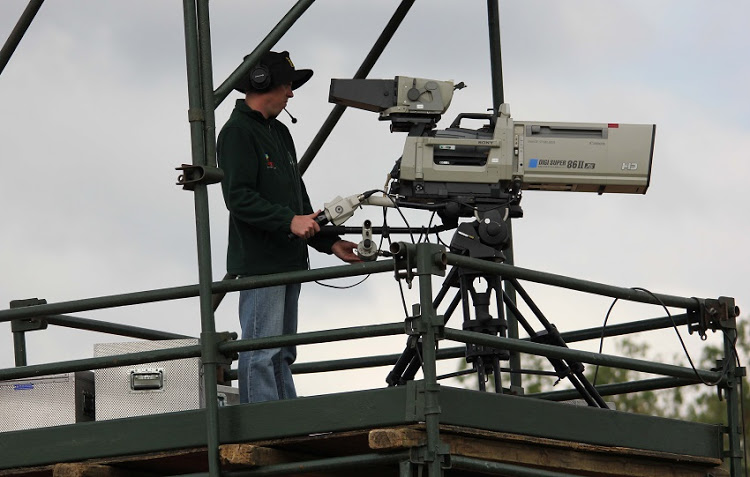 SABC camera man during the a match in South Africa

The Confederation of African Football (CAF) says it is working with other partners to ensure that South African football fans can watch Thursday's opening 2021 Africa Cup of Nations qualifier against Ghana.

Bafana Bafana fans are facing a broadcast blackout for the match in Cape Coast after the country's pay-tv SuperSport viewed by millions in the Southern African country revealed that the game would not be televised.

SuperSport have been left without any firm agreement to telecast the match after CAF cancelled its agreement with Lagardère Sport - the French company that sold the rights to the South African broadcaster.

With just a day before the match and no agreement with SuperSport in place, CAF says it is exploring other options to telecast the match in Cape Coast to make sure that South Africans get to match the match against Ghana.

"CAF took note of Supersport’s decision and is taking the necessary steps to ensure that the matches scheduled to be broadcast by Supersport are broadcasted by other sources, so that football fans can continue to follow CAF competitions," a CAF spokesman said in a statement on Wednesday.

CAF could give state broadcaster SABC TV the right to air the the match or consider showing the game in South Africa on Youtube like it did with the preliminary stages of the 2022 World Cup qualifiers.

Supersport, the pay-tv operator, said it will not show the match to its viewers because of the stand-off between CAF and Lagardere.

“We are in a difficult position where we cannot broadcast the CAF games when we don’t have a firm contractual arrangement in place.

But while South Africans will not be able to see Bafana tackle Ghana‚ Ghanaians will watch the game as state broadcaster GTV has acquired the rights to show the game in the West African country.

However South African should be able to watch the national team's qualifier against Sudan at the Orlando Stadium four days later because of an agreement between SAFA and SABC.

The SABC confirmed on Tuesday that they would be able to broadcast Sunday’s encounter against the Sudanese.