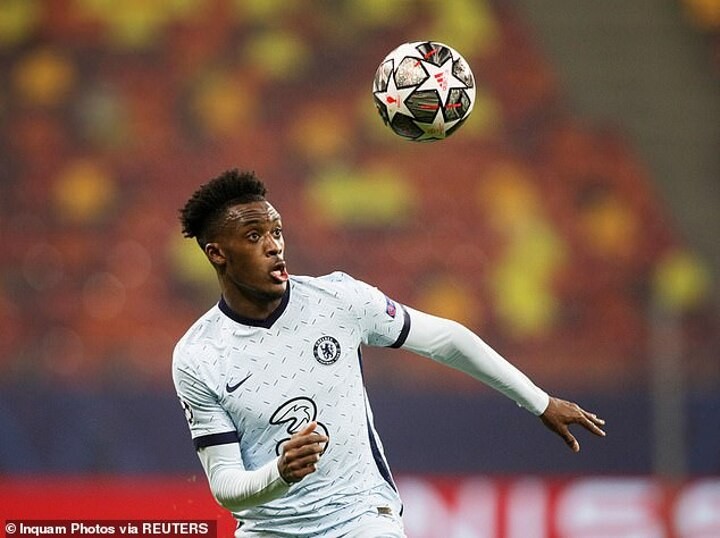 Three days after suffering the ignominy of being substituted just 30 minutes after coming on at half-time, the 20-year-old was back in the starting XI for, arguably, his manager’s biggest match since arriving at Chelsea four weeks ago.

Tuchel’s treatment of the youngster and his subsequent public criticism of the winger has divided opinion.

Some believe Hudson-Odoi has been unnecessarily exposed to public humiliation, while others feel it was a mere case of Tuchel administering a dose of tough love.

Speaking ahead of kick off Tuchel explained: ‘I can totally rely on him, because he always delivered.

‘He had some problems to have the same impact when he came off the bench but it’s not a problem - just a little lesson to learn from.

‘After the match it was forgotten an hour later and this is how we behave and a way we can trust each other also.

‘There’s no need to make it bigger than it was, it was my decision at that moment.

‘We can debate whether it was the right decision. It was a hard decision. I had my reasons but from here we move forward. There’s no reason to not trust Callum.’

Indeed, Tuchel’s decision to start Hudson-Odoi on Tuesday night an obvious indication of the esteem he holds the youngster.

The Blues manager’s belief in his ability isn’t in question; the fact the academy graduate has started in six of Tuchel’s eight games in charge is indicative of that faith.

But Saturday’s embarrassment should also act as a timely reminder of the standards Tuchel expects.

As hard as it might be, it would be counter-productive for Hudson-Odoi to take last weekend’s circumstances to heart. Rather, he should take what happened at Southampton as motivation.

By all accounts Tuchel’s controversial move has had the desired affect.

Hudson-Odoi's reaction has been positive; he hasn’t sulked or moped - just got on with the job at hand, probably with an extra spring in his step.

Indeed, there were clear signs in Budapest on Tuesday night that Saturday’s humbling has been forgotten.

Hudson-Odoi’s thankless dash in tracking Thomas Lemar helped prevent a 15th minute Atletico opener an obvious nod to Tuchel that whatever lesson he was trying to impart had been heeded.

His influence in the attacking third grew, too. His precise pass into Mason Mount pass momentarily unlocked Atletico’s impermeable defence, the understanding with his fellow academy graduate a feature of Chelsea’s attacking plan.

So, at least for now, there appears to be no hard feelings.