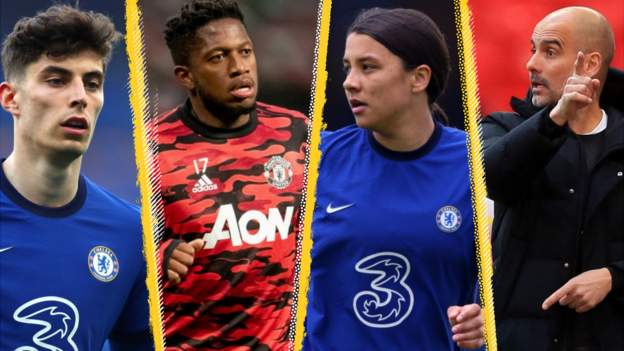 Chelsea and Manchester City will meet in the Champions League final, but will fans be able to travel to the game?

Turkey is in lockdown until 17 May, with the biggest game in European football set to take place in Istanbul on 29 May.

Uefa hopes both clubs will get a minimum of 4,000 tickets each, although there are concerns about supporters travelling during the coronavirus pandemic.

"We are assured the temporary lockdown which is in force until 17 May should not have any impact on the match," a Uefa spokesperson said.

"Uefa continues to work closely with the Turkish Football Federation and the local and national authorities to stage the match safely."

Chelsea women will travel to Gothenburg, Sweden, to face Barcelona in the Women's Champions League final on 16 May.

Manchester United will play Villareal in Gdansk, Poland, in the Europa League final on 26 May.

What is the situation in each country?

It is currently illegal in the United Kingdom for people to travel abroad for holidays, but this will be reviewed on 17 May.

Currently, people need a permitted reason to travel abroad - and must isolate for 10 days and take two coronavirus tests when they return.

None of three host countries is on the UK's red list.

Which countries will be on the UK's green list?

Turkey went into its first lockdown in April, when the country had the highest infection rate in Europe.

The country reported 22,300 new casesexternal-link of the virus on Thursday, but the health minister said cases are declining significantly.

Poland increased its lockdown measures in March after a spike in cases, although it has recently reopened shopping centres and museums.

There are plans to allow up to 50 people to attend outdoor and indoor events from 29 May - three days after the Europa League final.

Sweden, which has opted against lockdowns throughout the pandemic, has registered a total of 14,151 deaths from the virus.

The government has proposed to open football stadiums to up to 500 fans from 17 May - the day after the Women's Champions League final.

How many tickets are available?

It has yet to be confirmed how tickets will be allocated.

What do the fans think?

Wembley has been suggested as an alternative to Istanbul, but it is scheduled to host the Championship play-off final on the day of the Champions League final.

Asked about changing the venue of the Champions League final, Alex Churchill of the Chelsea Supporters Club told BBC Radio 5 Live: "It would be an opportunity for a gesture for Uefa to say 'we are the competition of the fans'.

"They could have it in Istanbul next year and Istanbul would get more money out of it was open and could bring people in.

"It is a gesture they could make but they won't. Did I think for one second they would entertain it? No."

How can fans in England watch?

All three finals will be shown on BT Sport, with the Women's Champions League final free to watch.

The next stage of the English government's roadmap out of lockdown begins on 17 May, which sees legal restriction on gatherings outdoors lifted.

Up to 30 people can then meet outdoors, and up to two households or the 'rule of six' indoors.

Pubs, bars and restaurants will be able to reopen their indoor seating areas, with customers having to remain seating when ordering, eating and drinking.