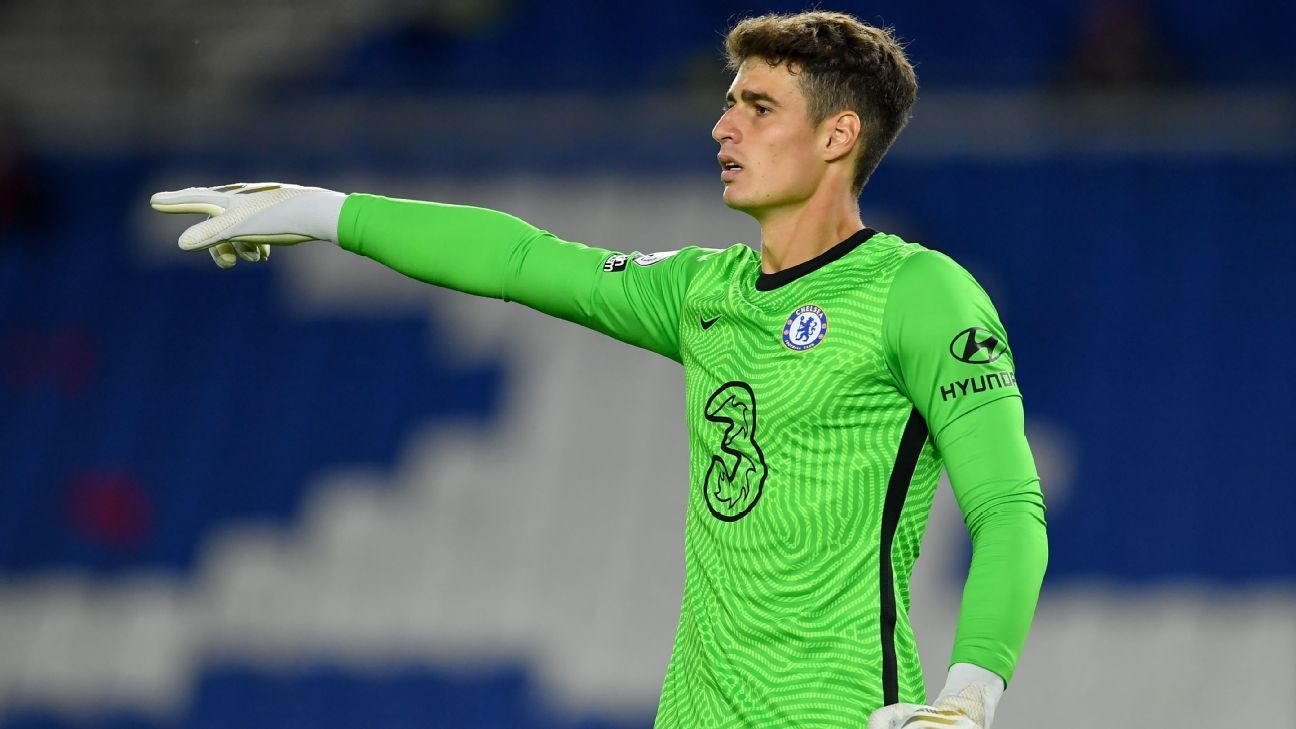 Kepa Arrizabalaga is used to things happening fast. Aged 23, he had made 53 La Liga appearances when Chelsea made him the world's most expensive goalkeeper in the summer of 2018. Athletic Bilbao finished a modest 16th place that season. Kepa had one international cap for Spain, earned in a 5-0 friendly win over Costa Rica. Despite possessing more potential than proven pedigree, the Blues handed him a seven-year contract in a remarkable show of faith for a club famed for its capriciousness.

Thiago proves vs. Chelsea that he's just what Liverpool lackedKepa, Christensen both 4/10 as mistakes haunt Chelsea vs. Liverpool

Just two years later, Kepa is losing the battle to save his Chelsea career as head coach Frank Lampard harbours mounting doubts over whether he will ever become robust enough to form the first line of defence in a Premier League title-winning team.

With Edouard Mendy's imminent £20 million arrival from Stade Rennes and Willy Caballero trusted to play in the cup competitions, is it already too late? There are precious few examples of goalkeepers who recover from the position Kepa finds himself in now. Some sympathy should exist given the dramatic trajectory of his career thrust immediate expectations on a player palpably yet to fully mature.

Kepa was twice dropped for Caballero toward the end of last season, but Lampard's faith in restoring him to the No. 1 position has not been rewarded. He failed to get down to a low shot from distance from Leandro Trossard in their opening game, though Chelsea won that game 3-1. However, his woeful attempted clearance, with his team down to 10 men, gifted Sadio Mane the opening goal in Liverpool's 2-0 win at Stamford Bridge on Sunday.

It feels significant these days that Kepa's price tag was not the product of negotiations between two clubs. Athletic put an €80m (£73.5m) release clause into Kepa's contract to essentially ward off interest from Real Madrid, aiming to prevent a young talent born in the Basque town of Ondarroa and developed entirely through the Bilbao academy from leaving on the cheap. It was Chelsea who decided simply to cut to the chase, paying that fee in the belief comparable business elsewhere made it more palatable, chiefly the £66.8m Liverpool paid Roma for Alisson, which first broke the world record for a goalkeeper that had stood since Juventus paid Parma £32.6m for Gianluigi Buffon in 2001. Yet Alisson is almost exactly two years older than Kepa and was much further along in establishing himself for club and country.

Prior to Lampard's arrival, Chelsea were so often criticised for short-term thinking and so the willingness to offer a young talent such a long contract should be lauded in one sense. But the concern internally now is that this major judgement call was misguided. The coronavirus pandemic has depressed some elements of the transfer market to the extent that Chelsea would have to take a huge loss to jettison Kepa now.

Kepa certainly hasn't helped himself. A competent debut season was undermined by a staggering show of indiscipline when refusing to be substituted when he appeared to be injured in the Carabao Cup final against Manchester City. He has since claimed the Wembley row was a misunderstanding, and although the situation pointed to a wider malaise as part of then-coach Maurizio Sarri's tenure unravelling, Kepa's attitude was publicly called into question.

Last season, criticism of his performances followed. There are a plethora of statistics available to underline the issues but perhaps these two are most relevant: Kepa has conceded 19 goals from outside the box since he joined Chelsea, more than anyone else in the Premier League, and his expected goals against differential is 12.7. That means Kepa conceded almost 13 goals more than would reasonably be expected from the shots he faced. This is simply an unsustainable deficit for a team that has spent £220m in an attempt to bridge the gap to Liverpool and Manchester City.

Off-field issues are reported to have made matters worse, chiefly his slow progress in learning English and a split from his childhood sweetheart of nine years, Andrea Perez.

The club are acutely aware of the pressure Kepa's price tag can bring. Sources have told ESPN that senior figures at the club were determined to keep Kai Havertz's final fee under the £71.4m paid for Kepa, something they managed with the eventual acquiescence of his former club, Bayer Leverkusen.

Lampard appreciates how delicate the situation is, combined with the unique challenge of restoring confidence in goalkeepers, a task complicated by the idiosyncrasies of the role.

"I think it is the hardest position [to rebuild a player's confidence] because of the individual nature and mistakes generally get punished with goals," Lampard told ESPN. "That doesn't happen necessarily with other places on the pitch. The eyes can be drawn to that and I understand that. As a manager I also have to be sympathetic to that point.

play1:02Burley: I feel sorry for Kepa

"Last year, I changed the goalkeeper between Kepa and Willy a few times. When I do it I do it with a different mindset to outfield players because I understand the different elements to it. I am very aware of that. At the same time we are always striving for the best performance we can get and that is what we must continue to do."

Chelsea's defensive problems are not solely down to Kepa. They conceded more goals from corners than any other team in the Premier League last term and had the worst defensive record of any team in the top 10. Thiago Silva's arrival from Paris Saint-Germain is an admission there is an absence of leadership at the heart of the defence. But Kepa is currently a distraction for a team aiming for a title challenge rather than a central component of it.

Play for FREE! Be sure to return each week to make new picks. Make Your Picks

Perhaps Kepa can draw inspiration from his compatriot and friend David de Gea's initial experience at Manchester United. De Gea joined United from Atletico Madrid in 2011 for £18.9m, then a British record for a goalkeeper. He was younger than Kepa, aged just 20, but there were similar issues with language and conditioning. De Gea weighed just 71kg when he arrived and was put on a programme which involved five additional gym sessions per week, beginning a transformation he later described as becoming "Captain America in one year."

Former United goalkeeping coach Eric Steele explained: "There were lifestyle issues. He'd sleep two or three times a day. He'd have his main meal late at night. He'd eat too many tacos. We pushed protein drinks on him straight after training. We physically made him drink. We had him in the gym a lot. He hated it. They don't do the gym in Spain as much. We needed to build his core strength."

Sources have told ESPN there are some at Cobham who believe Kepa could be doing more to improve his ability to compete. There are also understood to be technical concerns, chiefly that he is too late getting down to shots and could take steps to simplify how he dives for the ball.

Goalkeepers usually aren't given long to rectify these errors. Just ask Loris Karius, who left Liverpool on loan for Besiktas in 2018 after a series of high-profile errors aged 25. It feels premature in some regards to dismiss a relatively young goalkeeper but with the stakes so high at Stamford Bridge, the clock is definitely ticking for Kepa.