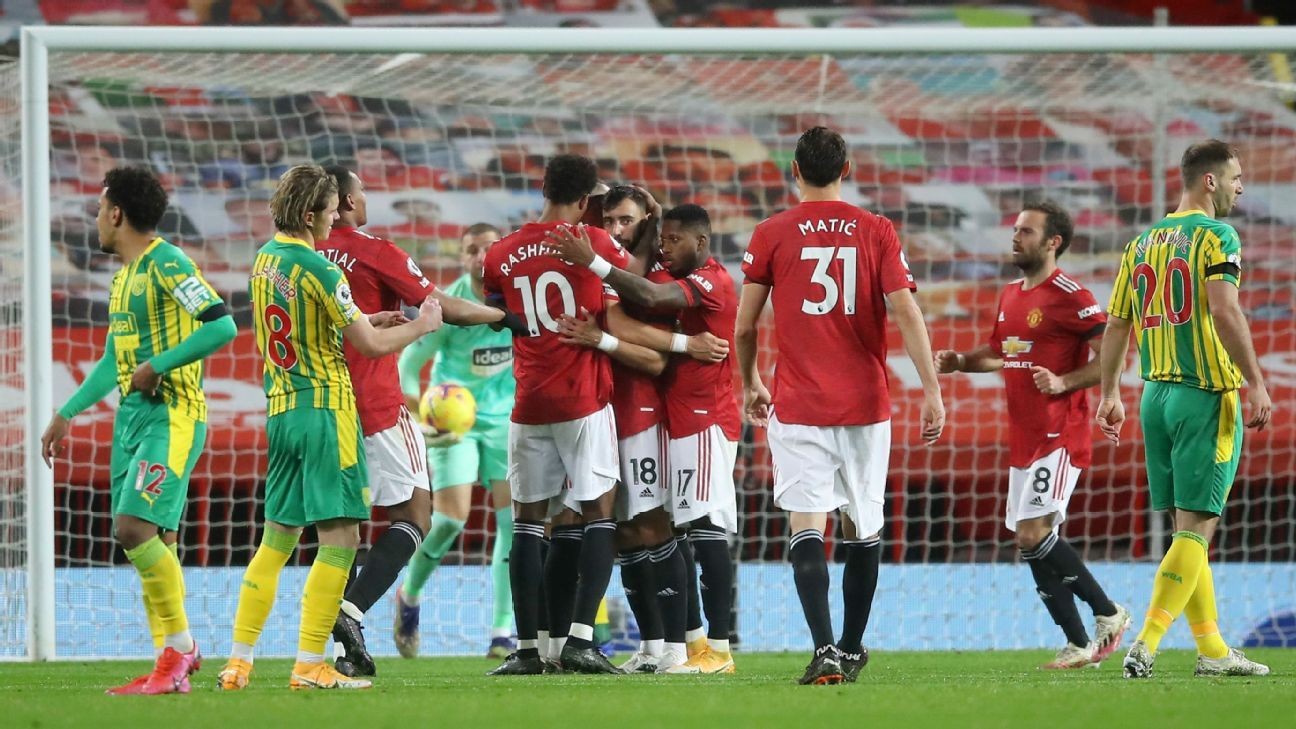 MANCHESTER, England -- Two weeks ago Manchester United were a club in crisis after back-to-back defeats. Now, after a 1-0 win over West Bromwich Albion at Old Trafford on Saturday night, they are above Manchester City in the Premier League table.

In the space of an international break, Ole Gunnar Solskjaer has gone from answering questions about his future to fielding enquiries about a possible title challenge. Bruno Fernandes' second-half penalty -- United's first home league goal in 324 minutes -- was enough to earn a first home win in the league this season at the fifth time of asking.

Losing three of your first four home games would usually rule out any hope of ending the season with the trophy but this isn't a normal season. United are seven points behind leaders Tottenham with a game in hand and meetings with Southampton, West Ham, Sheffield United and Leeds to come before Christmas. After a start that has been hampered by a short pre-season and two international breaks, United's campaign can start here. Solskjaer will hope that it does, although he acknowledged afterwards there is work to do.

"It's definitely not a step forward performance-wise but sometimes three points are more important than the performance," he said. "To move up the table we have to play better. After an international break isn't easy, there is not much time to prepare for the game.

"We haven't had a win at home in the league this season. A lot was said and written and it probably affected the players more than I'd have liked but it has."

Solskjaer still has questions to answer, like why was the first 45 minutes against West Brom so sluggish? Why were both Nemanja Matic and Fred needed in midfield against a team who haven't won all season and what does Donny van de Beek have to do to get a game?

Man United have mostly underwhelmed this season but are still well-positioned to make a run ahead of the busy festive period. Photo by Martin Rickett - Pool/Getty Images

Solskjaer can point to the performance of goalkeeper Sam Johnstone as one of the reasons why the scoreline wasn't more comfortable after the former United academy graduate made two fine saves from Anthony Martial and another from Marcus Rashford. He saved Fernandes' first attempt at the penalty, too, only for video referee Peter Bankes to notice he had left his line early, giving the Portuguese midfielder a second chance to make amends.

It wouldn't be United if there wasn't a scare, though, and they needed referee David Coote to overturn his decision to award a penalty for a Fernandes challenge on Conor Gallagher just 47 seconds into the second half after looking at the pitch-side monitor. Ex-United star turned pundit Rio Ferdinand branded Coote's change of heart "disgraceful", although Solskjaer insisted the key decisions were right.

"They are very tight calls and he probably made two, no make that three, right decisions with the penalties because Sam was off the line," he said.

At the final whistle, Fernandes was caught by the television cameras puffing out his cheeks in relief and it was easy to understand why. It was not a performance that will frighten the rest of the league but after consecutive league wins for the first time this season and a welcome clean sheet, they are at least looking up the table rather than down.

Solskjaer's United has a history of building momentum, too. He won 14 of his first 17 games in charge after taking over from Jose Mourinho and went 19 games unbeaten last season. A similar run through December and January this season would lift United into the group of title outsiders with Tottenham, Chelsea and Leicester.

"We know we can play better than this and certainly could've made it more comfortable with chances early on," said Solskjaer. "When you don't do that there's always an edge to the game. It was important to get that win, you could see that, but we didn't have composure or quality to get the second goal."

Composure and quality in attacking areas are two things United need to find if back-to-back victories over Everton and West Brom are going to be a springboard rather than another flash of inconsistency.

In the space of 14 days, Solskjaer has gone from dead man walking to leapfrogging Pep Guardiola. In another fortnight, he will be preparing to go head-to-head against Guardiola at Old Trafford, having either built on a scrappy win over West Brom or slipped back towards square one.