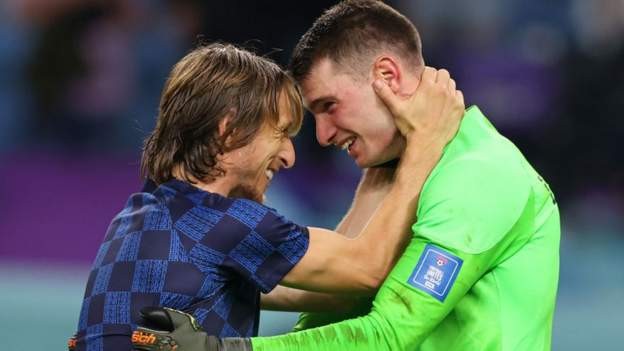 Luka Modric is more than just a playmaker for Croatia.

The Real Madrid midfielder led his country to the World Cup final in 2018 and now, with a quarter-final against favourites Brazil looming on Friday, there is an ambition to emulate that achievement - and it might not even be his last try at a major international trophy.

At the age of 37, he remains as important for Croatia as ever. The brain behind his team's attacking approach, his influence is just as key off the pitch, acting as a father figure to the new generation of young players.

"Why can't you make a mistake?" Croatia skipper Modric asks Livakovic in a hotel lobby. "Everybody makes them. I feel that your problem is you're afraid to make them."

Fast forward to Monday's last-16 game against Japan and it was Livakovic who became the hero when, after a starring role throughout, he saved three penalties during the shootout to send Croatia to the quarter-finals.

'The best Croatian player of all time'

The World Cup in Qatar is often described as a swansong for Modric, but it is not known yet if he will continue in the national team after the tournament, with Euro 2024 still a distinct possibility for him.

Modric, who has 159 caps and led Real Madrid to a 14th Champions League triumph last season, made his debut in a friendly against Argentina in March 2006 and has never looked back.

"Luka is the best Croatian player of all time," former Croatia midfielder Nenad Bjelica said. "Of course, if he can give some advice to young players, he will give it.

Croatia have not always impressed during this tournament but, now into Friday's quarter-final against Brazil, Bjelica is confident Croatia can spring a surprise.

"We don't have such a big squad [compared to Brazil], which is a little bit of problem," he said. "Brazil had a chance in their last group game against Cameroon to give chances to other players and rest the key ones. We didn't have that chance.

"Our best players always have to play. The last game against Japan wasn't perfect because our team looks a bit tired. Our best and very important players like [Marcelo] Brozovic, Modric and [Mateo] Kovacic are showing it, but it's normal as they had to play four games under big pressure to win these games.

"Now, we don't have any pressure. Our expectation was to get out of the group and we managed that. [Against Brazil] it's a big game for us. We have some expectations because we have a good team. We can enjoy it and I think we have enough quality to surprise them."

If Croatia beat Brazil on Friday (15:00 GMT), it will be another memorable chapter in Modric's international career.

"I think 2018 was his 'Last Dance'. This is just a major plus that shows his amazing longevity," Telesport journalist Juraj Vrdoljak said. "The team is slightly different now to the 2018 World Cup, the hangover from 2018 is long gone.

"People who support the team had their high then, and the dream scenario for this 'golden generation' was pretty much achieved with that silver medal.

"Now expectations were also met. Miraculously, here we are in the quarter-final again. So it's a new chapter unveiling."

After the 2018 World Cup, coach Zlatko Dalic saw some of his more experienced players ending their international careers - one of whom is now his assistant, former striker Mario Mandzukic.

"We changed a lot in the last four or six years," Bjelica said. "Now, we have senators like Modric, Ivan Perisic, Domagoj Vida, Dejan Lovren. They are very important for the team, they have experience.

"But we also have young players like [Josko] Gvardiol, Josip Sutalo, Martin Erlic, Lovro Majer and Josip Stanisic. This generation change went without any problems, because we were successful.

"When it comes to the future, we don't have to worry. When Modric or Lovren won't be in the national team, I think we will have players to replace them."

So far, 20-year-old RB Leipzig centre-back Gvardiol is the poster boy of the new generation.

In October 2019, Bjelica worked as head coach at Dinamo Zagreb and gave Gvardiol his league debut as a 17-year-old. The defender went on to move to Germany for 16m euros (£14m) in 2020 and has recently been linked with moves to Chelsea and Real Madrid.

"He is a very good guy, a big worker and focused on football," Bjelica said. "It's no surprise to me how he has improved over the last years, because he has great character.

"The way he developed, I think he won't be at Leipzig for a long time. I'm sure it'll be the biggest transfer of a Croatian player in history."