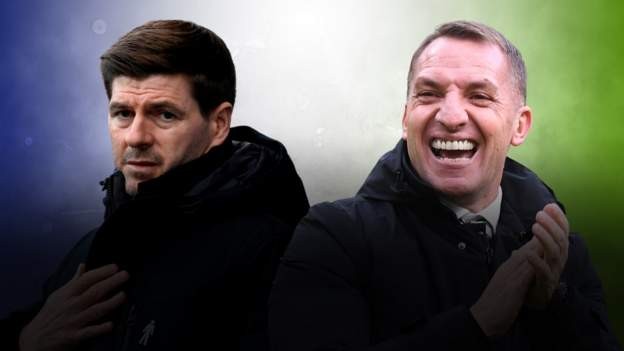 Celtic manager Neil Lennon has already conceded this year's title may be beyond his team, but can Rangers rub further salt into the wounds by matching their feted invincibles in the league and complete the Premiership season unbeaten?

Steven Gerrard stands on the cusp of securing the Ibrox club's first major trophy in a decade, while ending Celtic's quest for a record 10th straight Scottish top-flight title.

Rangers' Premiership superiority this season is demonstrated by the 23-point gap at the top and has invited comparisons with the feat of Brendan Rodgers' 'invincibles' in season 2016-17.

With that now the realistic target to aim for, BBC Scotland examines Rangers' prospects.

Rangers have won 22 of 25 fixtures - their only dropped points came in draws away to Livingston, Hibernian and Motherwell - leaving them 13 games from completing the league season undefeated.

That would emulate the achievement of Celtic four years ago - with Rodgers' team also unbeaten in the cups on the way to a domestic treble - but how do their respective records compare?

Rodgers' team amassed 106 points in finishing with 34 wins and just four draws as the current Leicester City boss made history in his first campaign in Glasgow.

To beat that tally, Rangers have to win all 13 remaining games to finish on 108 points. A big ask, but by no means beyond Gerrard's men as their recently ended 15-match league winning streak shows.

To match that Celtic total, Rangers can afford one more draw. By the same stage of the season, Celtic had dropped just two points, with 73 from 75 compared to Rangers' current haul of 69.

Gerrard's men have been flawless at home, winning all 12 games, while Celtic's 100% record on their own patch lasted 14 matches until successive draws with the Ibrox club and Partick Thistle.

Celtic finished that season 30 points clear of closest challengers Aberdeen, with Rangers nine further back in their first top-flight season in four years.

Nine more victories would ensure Rangers eclipse their biggest points total, the 97 accumulated in 2003 under Dick Advocaat when they pipped Celtic to the title on goal difference.

A miserly backline has been the foundation of Rangers' title charge. While Celtic's invincibles had conceded 16 goals by now, and ended with 25 against, Rangers are on course for the best-ever defensive record in the Scottish top flight.

Yet, having let in just seven goals in 25 matches, Rangers' current rate is just 0.28 per game.

And it's not only on the domestic scene where Gerrard's side are setting the standard. In Europe's top 30 leagues ranked by Uefa co-efficient, Opta data shows the Ibrox club have the best defensive record, comfortably clear of the next tightest sides Red Star Belgrade (0.37 per game), Olympiakos (0.39) and Slavia Prague (0.4).

Rangers have already kept 19 Premiership clean sheets - six more than the invincibles' season total - and their defensive organisation is highlighted in allowing 43 shots on target in 25 games. That, and the 0.73 expected goals against, are both the best in the division.

Rangers' 5-0 rout of Ross County on Saturday has burnished their scoring stats to leave them just two short of Celtic's haul of 67 at the same 25-game mark.

Rodgers' men ended the campaign with 106 goals scored - a Scottish top-tier record - meaning Rangers need to net an average of 3.2 goals per game in their 13 remaining fixtures if they are to match that total.

Having been heavily reliant on the goals of Alfredo Morelos in recent years, Rangers now have an impressive spread of scorers, with 16 players having netted in the Premiership.

While Morelos - who accounted for a hefty 26.1% of the team's goals across all competitions in each of the past two seasons - has netted just six this term, Kemar Roofe has made a telling impact.

The 28-year-old striker has 10 goals in just 15 league appearances following his move from Anderlecht last summer.

And captain and full-back James Tavernier leads the way with 11 goals - including six penalties - complemented by eight assists, both more than any other player in the division.

'No evidence to suggest they won't do it'

Rangers can absolutely end the season without losing. There's no evidence to suggest anybody can beat them. They have been so incredibly consistent and their numbers are incredible.

When they've been asked questions, they've answered them all season long. They are playing with such a clear idea of what they want to do. And Gerrard has so many options in each position now, which is the big difference from last season.

The last month or so - Saturday aside - the performance level had dipped although they were still winning games. They missed a bit of their mojo, but that came back on Saturday in spades. They were outstanding and that might just give them the boost to kick on again.