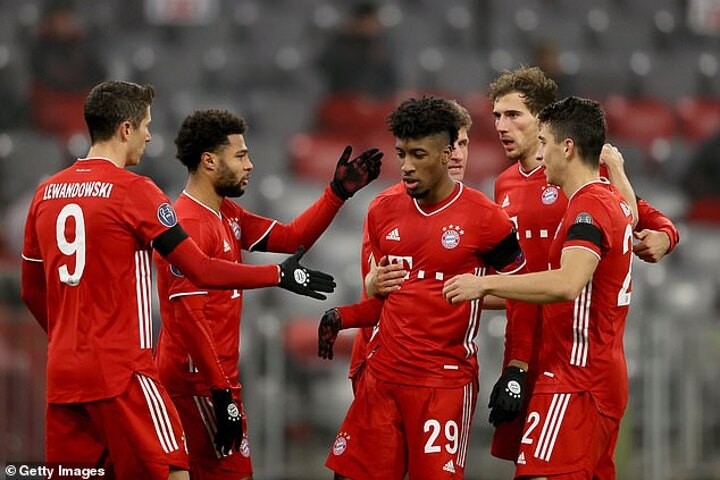 In Hansi Flick's 53 competitive matches in charge of Bayern Munich, only one team has succeeded in stopping them from scoring a goal.

That was RB Leipzig, who earned a goalless draw at the Allianz Arena back on February 9, the one blip in the 30-match unbeaten run from December 11 that saw Flick's Bayern win a historic Treble. They won the other 29 games.

And given that Bayern scored 96 goals during that run - an average of 3.2 per match - Leipzig's defensive effort in that game look positively Herculean.

It's such crumbs of comfort that Bayern's challengers cling on to sometimes, but as Leipzig prepare to make the trip to Bavaria again this Saturday, as their closest Bundesliga challengers, they do so believing there are fallibilities to exploit.

Sure, Bayern do occupy their familiar position at the top of the Bundesliga. Sure, they did qualify from their Champions League group with consummate ease. But their rivals think Flick's all-conquering side are there for the taking - for now anyway.

The hope at the beginning of the campaign was that Bayern - whose 2019-20 campaign ended with the Champions League final on August 23 and whose 2020-21 season commenced just 27 days later on September 18 - would at some point see fatigue overtake them.

As well as the triple demands of defending the Bundesliga, DFB-Pokal and Champions League, they must participate in the FIFA Club World Cup in Qatar in February.

While being crowned champions of the world will be appealing for Bayern, the tournament is something of a nuisance at a pivotal stage of the season.

Flick will certainly hope his team have a substantial lead at the top of the league table, and a favourable draw in the last-16 of the Champions League, when they depart for the Middle-East. If they don't, it will just be an exhausting side-show.

While there have been ominous signs that Bayern's ruthless domination will continue - the 8-0 spanking of hapless Schalke on the opening night, a 4-0 drubbing of Atletico Madrid, 5-0 hammering of Eintracht Frankfurt, a 6-2 win away to Leipzig's sister club Red Bull Salzburg, and a 3-2 win at rivals Borussia Dortmund - there have been some shaky moments too.

The 4-1 loss at Hoffenheim back in September was a shock scoreline but probably a cathartic result that needed to happen to Bayern and their winning run.

In the recent 1-1 draw with Werder Bremen, they were indebted to the saves of Manuel Neuer to earn a point after falling behind.

At VfB Stuttgart last weekend, they fell behind and then might have fallen behind again had Lassana Coulibaly not been retrospectively punished for a foul on VAR, before ultimately winning 3-1.

While Robert Lewandowski continues to score goals pretty much with his eyes closed - 15 already - and Thomas Muller is his usual self, Flick has demanded more from summer arrival Leroy Sane.

Sane, who signed from Manchester City for £54million, has started his Bayern career with five goals and three assists in 11 outings.

But Sane has only actually started four of those games and is in danger of becoming something of a supersub. In his defence, he did suffer an injury early on but Flick has already called out his failure to track back and help out defensively.

With the likes of Kingsley Coman and Serge Gnabry also in the ranks to deliver service from wide areas, Bayern certainly don't feel the need to involve Sane all the time.

So while it would be wrong to say that Bayern are simply getting by - after all, they had already lost four league games by this time of year 12 months ago - there are maybe some chinks in the armour.

The question is whether Leipzig can capitalise? They would go top with a first-ever win over Bayern in Munich and they do look well-equipped to make the title race a closer run thing than usual.

Julian Nagelsmann's team make the trip brimming with confidence after boosting their chances of making the Champions League last-16 in midweek.

English observers will have been stunned to see Alexander Sorloth, who flopped so miserably at Crystal Palace in 2018-19 yet somehow moved to Leipzig for £18m in the summer, pop up in the 92nd minute to earn a 4-3 win away to Istanbul Basaksehir.

The Norwegian's winner puts Leipzig level on nine points with Manchester United and Paris Saint-Germain in Group H, with the Premier League side set to visit Germany on Tuesday.

They have certainly resurrected their hopes nicely since that 5-0 demolition at Old Trafford and win over United will take last season's semi-finalists through.

Their domestic form has been solid, with just the one defeat so far and six wins from nine matches.

Losing Timo Werner to Chelsea in the summer seems to have resulted in goals being more evenly spread throughout the team. Yussuf Poulsen has five and Emil Forsberg three, but left wing-back Angelino, on loan again from Manchester City, has been excellent with six goals.

Angelino will be called upon to show more defensive acumen against Bayern, that is for certain, and Leipzig's hopes of getting another clean sheet will rest on a likely back three of Dayot Upamecano, Ibrahima Konate and Marcel Halstenburg.

Upamecano will be tasked with keeping tabs on Lewandowski - the pair have good mutual respect for one another, with Upamecano saying 'I learn a lot from playing against him' in the past - and Nagelsmann will hope to pull off the same tactical masterstroke he did last season.

He set up with a flexible 3-4-3 formation that moved from three to five at the back when Bayern were in possession. It placed plenty of strain on wing-backs Angelino and Tyler Adams but worked effectively to crowd out their defensive third.

Werner and Christopher Nkunku were encouraged to get in behind Bayern's full-backs Alphonso Davies and Benjamin Pavard at every opportunity, ensuring they couldn't just maraud forward at will.

It's a good template for Saturday though Nagelsmann will pride himself on thinking up a different, innovative approach so Bayern can't work his game plan out in advance.

Saturday's fixture isn't one that offers much enjoyment to fans of every other Bundesliga club.

It's a case of which is the lesser of two evils between a Bayern side whose dominance is total and, apparently, growing and a Leipzig club widely hated as being a monster created by the Red Bull corporation.

But, whether they like it or not, this match will be an important yardstick in this year's title race.