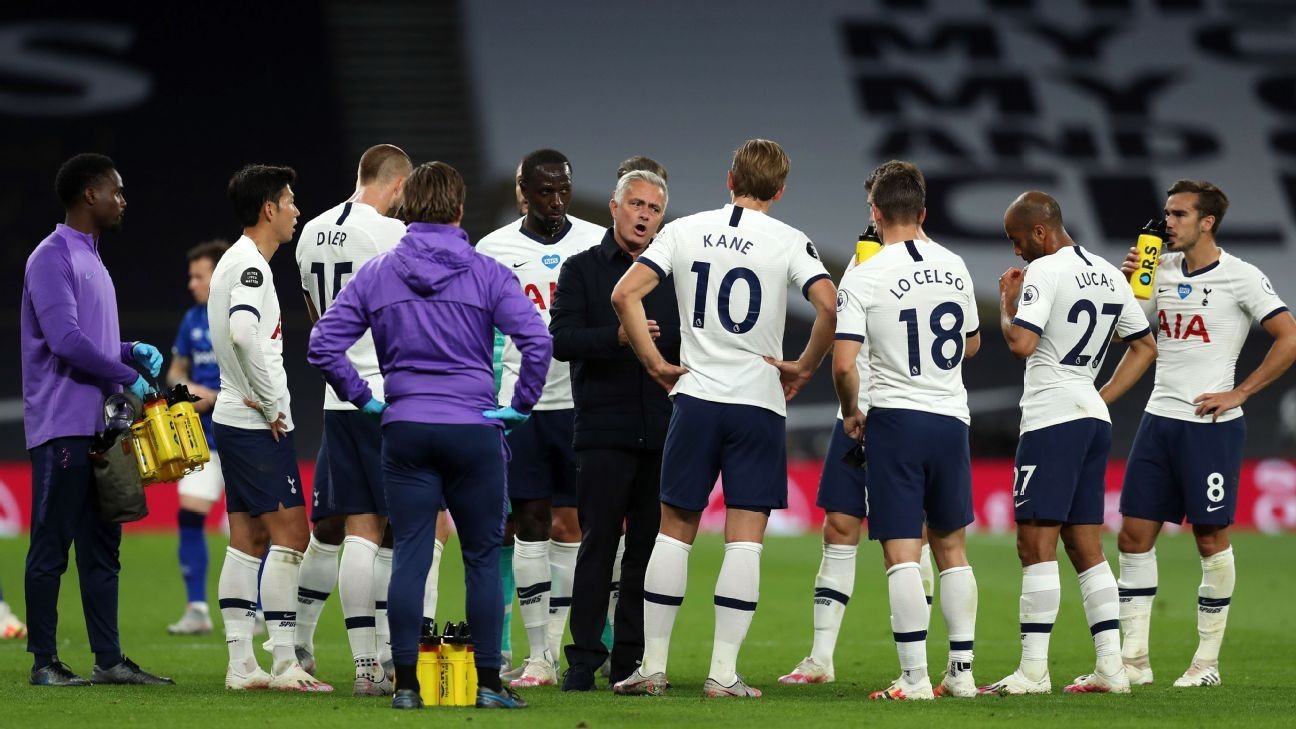 This weekend's north London derby is precisely the type of occasion the Tottenham Hotspur Stadium was built for. It is a £1.2 billion ($1.5bn) bricks-and-mortar manifestation of the club's decades-long struggle to emerge from Arsenal's shadow, something they achieved to an extent under Mauricio Pochettino on the pitch and are now attempting to replicate off it as well.

Spurs took a calculated gamble in proceeding with the project, just as Arsenal did when hatching their plan to leave Highbury in 1997. Both clubs were seeking to position themselves at the vanguard of English football and believed investing in their own backyard was the most viable option. However, a landscape change in the early 2000s brought Arsenal's decision into focus as a new wave of owners with limitless funds diluted the importance of matchday revenue in a club's success.

And now, the financial aftershocks of the coronavirus threaten to have an equally compromising influence on Tottenham as the world adjusts to pandemic life.

Arsenal are arguably still dealing with the ramifications of their stadium move as they attend yet another rebuild. Spurs must be concerned that a similar fate awaits them now.

"None of us thought we'd suffer the incredible heartache that we did during the process," said Tottenham chairman Daniel Levy shortly after the stadium finally opened in April 2019. It was, in some senses, a miracle the stadium was only delayed by six months given the obstacles Spurs had to overcome during an 18-year struggle to complete construction.

Initially, Spurs projected the venue would cost £400 million ($505m), just a shade more than the £390m ($493m) it cost Arsenal to leave Highbury in 2006. However, a series of delays triggered by myriad reasons caused the price to triple.

Will Messi leave Barcelona? If so, would he leave for Argentina, MLS or a team with Ronaldo?How Jesse Marsch became the most successful American coach in EuropeChampions League draw: Ronaldo, Juve unlikely to win; how far can Man City go?

Seventy different businesses were relocated and 80 different property transactions took place, the last significant one taking years as Archway Sheet Metal Works Ltd dug in to protect their family-owned business. The London riots of 2011 cast fresh doubt over the plans, the Brexit vote of 2016 increased construction and material costs and at one point, a warehouse the club acquired was broken into and turned into a drugs factory. There were countless sleepless nights, 4,000 people working round the clock at one point and more than 14 million man-hours clocked but the end result is undeniably spectacular. There was even a subtle dig at Arsenal, making the capacity 62,300 -- a fraction higher than their rivals, which currently stands at 60,704.

The Tottenham Hotspur Stadium can lay a strong claim to being the best arena in world football, but it comes at a price. Levy converted £525m ($660m) worth of debt into bonds with staggered maturities of between 15-30 years, staving off the prospect of having to pay back £637m ($805m) in loans next April. Sources have told ESPN Levy secured an "impressively" low interest rate when refinancing and a sum of £25m ($32m) was ring-fenced for transfers each summer. However, that was before COVID-19 struck.

The human cost of the pandemic is thankfully beginning to subside, but the economic consequences appear bleak and uncertain.

Just after the United Kingdom went into lockdown, Levy warned at the end of March that "people need to wake up to the enormity" of the pandemic, becoming the first significant football administrator to voice concerns for the future. Levy has always preached and practiced financial sensibility, yet the appointment of Jose Mourinho in November seemingly put a pragmatist and a spendthrift on collision course even before COVID-19 emerged. Mourinho insisted the issue of economic constraints stemming from the stadium were never mentioned in talks over succeeding Mauricio Pochettino.

"[There was] no discussion at all," Mourinho told ESPN this week. "The only thing that was important for me at that time is that my club has the best stadium in the world, the best training ground in the world. For me, there is nothing else than that.

"The other day [before Tottenham beat Everton 1-0], the first thing [Carlo] Ancelotti told me -- and you can imagine, he managed some of the best clubs in the world, managed in the Bernabeu, the Allianz Arena, the San Siro -- the first thing he told me was 'wow. This stadium is absolutely incredible.'

"So when it is my stadium, I don't think about anything else in relation to the stadium than the beauty, the comfort and the motivation that it is to play for a club that owns that stadium. After that, I think everything is internal and not to share in any discussion."

That last line hints at the pressures to come. After all, Spurs built their new home as an event centre. The book chronicling its journey is entitled: Destination Tottenham. It speaks of a desire for the stadium to be a "365-day-a-year asset to north Tottenham and the driving force behind the regeneration of the area."

Spurs deserve credit for adapting their site to operate as a hub for NHS activity during the pandemic, but this is not the social engagement Levy envisaged. Summer concerts have had to be cancelled, NFL matches postponed and Anthony Joshua's heavyweight title fight against Kubrat Pulev delayed as well. The ongoing absence of fans inside the ground costs Tottenham millions of pounds every home game, more than most clubs given the stadium was designed to stay open longer on matchdays, encouraging supporters to get there earlier, stay later and spend more throughout.

Spurs' business model was predicated upon the kind of engagement COVID-19 has attacked. It's hoped that fans will be allowed back inside stadiums early next season, but there are no guarantees. Similarly, there is no projected date for the resumption of gigs or similar mass gatherings.

Money will have to come from elsewhere. There is no desire at the club to cash in on prized assets, most obviously England captain Harry Kane, despite a pre-coronavirus market valuation of around £200m ($253m). However, Kane is desperate to win trophies and has hinted he may see his future elsewhere if that ambition isn't matched at Tottenham. The striker turns 27 later this month so his peak years are upon him.

The probable absence of Champions League football is another blow Mourinho's appointment was designed to avoid. "A Champions League wage bill on a Europa League budget" is how Arsenal director Josh Kroenke described the club's reported £235m ($296m) figure and although Spurs' is considerably lower at around £179m ($226m), missing out on Europe's elite competition creates another pressure point.

There is a school of thought suggesting failing to qualify for European competition altogether would boost either side's Premier League hopes next term, but the brutal reality ahead of Sunday's clash is this: both need Europa League income rather than no European income at all.

Mark Ogden believes a move to Arsenal or Man United would have resulted in far more Prem goals and trophies for Jamie Vardy.

Arsenal encountered a smoother ride in the build process after deciding to fund a new stadium in 1997. The Gunners briefly considered buying Wembley Stadium but after Football Association opposition, they settled on Ashburton Grove, just over 400 metres away from Highbury.

Emirates Stadium was completed ahead of schedule, staging its first Premier League game in August 2006, and it is a testament to its construction and design that it still feels near the zeitgeist almost 15 years on. But the catalyst for the move was Arsenal's belief in matchday revenue being the principal revenue stream funding further success.

The Gunners won the title in 1997, the Double in 1998 and were wrestling with Manchester United in a duopoly at the top of English football. United expanded Old Trafford in 1997 and saw their gate receipts rise from £43m ($55m) to £88m ($111m). Arsenal had to compete in stadium revenue and they did so. By 2014, only Real Madrid earned more from a home game than the Gunners' impressive £3m ($4m) figure.

It's undeniable that Arsenal made mistakes along the way. In 2009, the club were fourth in Deloitte's Money League for overall revenue but by 2018 they sat ninth, reflecting commercial under-performance especially compared with the global behemoth that United have remained even without consistent Champions League football.

The Gunners stuck rigidly to their principled, self-funded model and fans have long suspected Stan Kroenke's ownership aims to make money from football, not succeed in it. But Chelsea and Manchester City's largesse under rich, success-hungry owners exacerbated the effect of the belt-tightening at Arsenal. Suddenly, matchday revenue was less important, and spending only what you earned seemed an antiquated ideal. It led Arsene Wenger to defend UEFA's Financial Fair Play regulations and then ridicule them when clubs found ways around it.

The importance of player sales during this period was vital. Between 2009-13, Arsenal made £180m ($228m) profit in player sales, offsetting stadium debts not covered by the accompanying property developments and shrewdly easing some of the burden.

A relative subsequent decline in player sales combined with a lack of Champions League football since 2017 contributed to a problem which still affects the club today; on Thursday, Arsenal refinanced some of the debt on their stadium, presumably to take advantage of low interest rates.

The combination of internal difficulties and extraneous circumstances knocked Arsenal back on their heels for years, and it's hard not to think the same could happen to Spurs. The Gunners' reliance on player sales is an ominous warning for their north London rivals. The stadium will fall quiet this Sunday, but that warning will be heard far and wide.