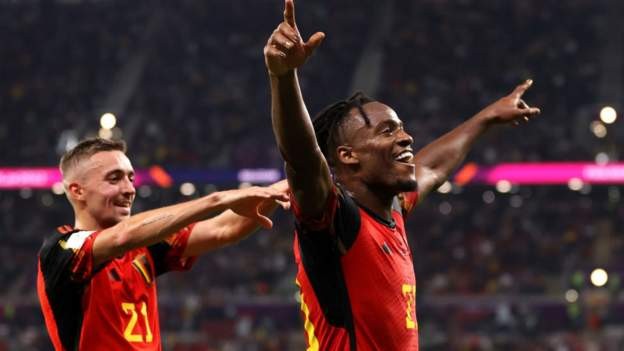 Belgium laboured to victory in their opening World Cup game as they were pushed all the way by an outstanding effort from Canada.

Canada dominated large portions of this Group F game but were wasteful in front of goal, particularly when Alphonso Davies saw a first-half penalty saved by Belgium keeper Thibaut Courtois.

Courtois also had to save well from Alistair Johnston, but Canada were undone against the run of play on the stroke of half-time when Michy Batshuayi collected Toby Alderweireld's long ball and fired a powerful left-foot finish past Milan Borjan.

Jonathan David wasted a glorious headed chance to draw Canada level and Courtois also saved from Cyle Larin. Canada were also left nursing a sense of injustice after they had two presentable penalty appeals ignored in the first half.

Canada continued to push forward in the second half but it was Roberto Martinez's side who closed out the win, despite a performance that made a mockery of their status as second in the world rankings.

"Canada deserved to be better than us in the way they played," Martinez told Match of the Day. "It's a win and we need to play better and to grow.

"This tournament is going to make you develop and grow as the tournament goes on. If you do that by winning games, it's an incredible advantage.

"Today we didn't win by our normal talent and quality on the ball, but you don't win in the World Cup if you don't do the other side of the game."

Belgium have Canada's poor finishing to thank for the fact they avoided the fate of Argentina and Germany in falling victim to a World Cup shock.

Martinez has presided over Belgium's so-called 'Golden Generation' but this ageing side, on the evidence of this performance, may have left their best days behind them.

Belgium still have glorious talent in the shape of Kevin de Bruyne and a world-class keeper in Courtois but they looked ragged, jaded and desperately vulnerable to the pace and energy of Canada's attacking play.

The defensive duo of Alderweireld, 33, and 35-year-old Jan Vertonghen have served country and clubs outstandingly well, but there was an air of desperation about some of their play as Canada, in the first half particularly, dragged Belgium to all parts. They simply could not cope with the speed and intensity of Canada, an ominous sign for future games.

Belgium can clearly perform much better than this and have main striker Romelu Lukaku to return up front but this was a tired-looking effort and coach Martinez, who is under pressure to bring success to this group having been in charge since 2016, will simply be relieved to come out of this game with three points.

Canada show they 'can live on this stage'

Canada were roared on by thousands of fans inside Ahmad bin Ali Stadium, giving thunderous and colourful backing to John Herdman's team.

And even though their first game of this World Cup ended in defeat, Canada's supporters still gave their team a deserved standing ovation at the final whistle after a performance in which they did everything but score the goal they richly merited.

Canada were fearless from the first whistle, sensing vulnerability in Belgium's defence and the disjointed nature of Martinez's team, whose ranking means they should be among the World Cup favourites.

They had Belgium on the run but squandered their big chance when Davies' tame penalty was saved by Courtois following Yannick Carrasco's handball. It was to prove a pivotal moment.

Canada made nearly all the running in this game but when the chances came they could not be taken, leaving them at the mercy of one moment of quality from Belgium, which duly arrived with Batshuayi's goal.

To their great credit Canada refused to take a backward step even after this setback, but main striker David, who has earned a big reputation with Lille, could not make the most of a clear headed opening in the second half.

Canada, however, can take pride and hope from this performance. They may have lost all four World Cup games they have played without scoring a goal, but there was so much to admire about their showing here.

The Canadians are ranked 39 places below Belgium, but matched them in all areas apart from that decisive strike.

"We had an opportunity to be top of the group tonight - that was the mission and we missed it, but I'm proud of the performance," said Herdman.

Attempt blocked. Cyle Larin (Canada) header from the centre of the box is blocked.

Attempt saved. Kevin De Bruyne (Belgium) right footed shot from the right side of the box is saved in the centre of the goal. Assisted by Leandro Trossard.

Attempt blocked. Thomas Meunier (Belgium) right footed shot from outside the box is blocked. Assisted by Kevin De Bruyne with a headed pass.

Attempt missed. Cyle Larin (Canada) header from the centre of the box is too high. Assisted by Samuel Adekugbe with a cross.

Attempt missed. Kevin De Bruyne (Belgium) right footed shot from outside the box is high and wide to the right. Assisted by Axel Witsel.

Attempt missed. Leander Dendoncker (Belgium) header from the centre of the box is too high. Assisted by Kevin De Bruyne with a cross following a set piece situation.

Alistair Johnston (Canada) is shown the yellow card for a bad foul.

Loïs Openda (Belgium) wins a free kick in the attacking half.

Thomas Meunier (Belgium) wins a free kick in the defensive half.

Alphonso Davies (Canada) is shown the yellow card for a bad foul.

Leandro Trossard (Belgium) wins a free kick in the defensive half.