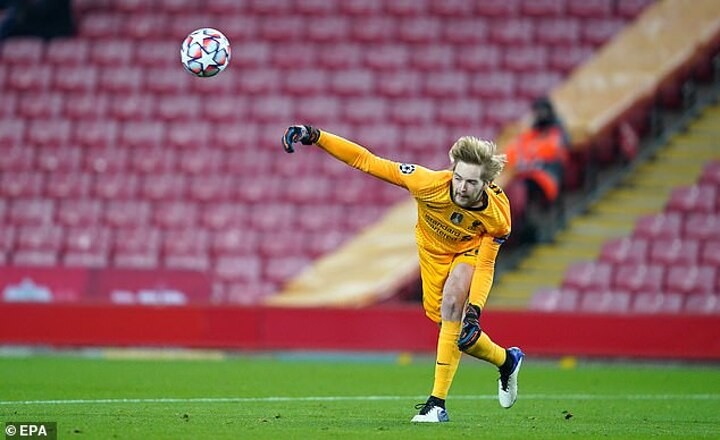 Caoimhin Kelleher made a crucial late save from Klass-Jan Huntelaar to earn Liverpool a win over Ajax and move the Reds into the Champions League knockouts.

The rookie goalkeeper was a surprise starter for Jurgen Klopp's side with first-choice goalkeeper Alisson out with a hamstring injury, with Tuesday night's performance the 22-year-old's first ever match in the Champions League.

Late on in his European debut, Kelleher was forced into a superb reflex stop from experienced striker Huntelaar, who headed Ajax winger Antony's cross goalwards from the six-yard box.

The save was crucial in the Reds' 1-0 win at Anfield, with Curtis Jones had earlier putting Liverpool in front, and the result secured the Merseysiders' route into the last-16 stage with one group game remaining.

Speaking about his debut, Kelleher told BT Sport: 'It was amazing for me to make my debut. Obviously, the most important thing was to get the win. Thankfully I was able to make a few saves. That's what I'm there for.

'It’s quite easy for me because when the players in front of me give the ball back to me, they always make the easy options.'

Before Tuesday night's match, the 22-year-old was believed to be Liverpool's third-choice goalkeeper behind Alisson and Adrian, with the latter filling in for the regular first-choice when he picked up a shoulder injury back in October.

But Liverpool manager Klopp believes Kelleher brings more security with his feet than Adrian and praised the Irishman for a 'good game' on his European debut.

Klopp told BT: 'In this game, we needed the natural football-playing ability of Caoimhin and because he’s a really good shotstopper as well. We made that decision and then you never know.

'All the boys are calm in the moment when they get the information, but there’s a difference to be there on the pitch and I’m really happy with how he dealt with it and how calm he was and how good he was. It was a good game.'

Kelleher's performance against Ajax also caught the eye of the BT Sport pundits, who believe the Irish shot stopper has earned the trust of Klopp and could feature in future matches for the Premier League champions, starting with Sunday's clash with Wolverhampton Wanderers.

Former Manchester United defender Rio Ferdinand said: 'Kelleher’s done himself no harm and given the manager something to think about.All you want to do is make the manager think, "I can trust him."'