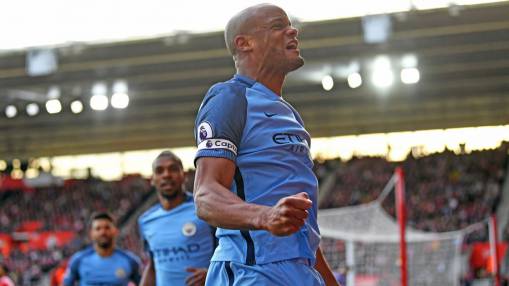 It's been nine years since Manchester City last travelled to Brighton. The two sides met in the 2008-09 League Cup, roughly three weeks after the takeover by Sheikh Mansour, at a time when there were two divisions between them. Premier League City conspired to lose 5-3 on penalties, after a 2-2 draw at the end of extra time with League One Brighton.

City were woeful on the road that season and that match set the tone for what would be a year of frustrating performances, as then-manager Mark Hughes struggled to get to grips with the job. His team were on top but created little of note before being punished by the plucky underdog.

The club was only recently granted huge spending power by the new owners and hadn't had chance to invest properly into the squad -- it was still a midtable side. They were there for the taking and Brighton was a banana-skin tie.

City's XI that evening was world away from the team that Pep Guardiola will pick on Saturday evening. One name, though, could be a survivor on the teamsheet from that last meeting almost a decade ago. It was only Vincent Kompany's sixth game for City and if he's in the lineup for the opening day of 2017-18, it will be his 300th start. That figure would have been a lot higher had the Belgian not been ravaged by a series of injuries over the last three campaigns.

That's a cause for concern for Guardiola, who is reported still to be eyeing up a move for another defender, just in case Kompany continues to have fitness issues. It may become more of a pressing issue if the manager continues to play a 3-5-2 set-up -- with only the much-maligned Eliaquim Mangala left as a senior option, if Nicolas Otamendi and John Stones continue alongside the captain.

The departure of Aleksandar Kolarov has left Guardiola a little short, beyond putting his faith in academy prospect Tosin Adarabioyo.

There is the hope, though, that Kompany's problems are behind him. He finished the 2016-17 season strongly, having spent a very long time easing his way back into action, taking his latest return far slower than any of his previous attempts. With him organising the defence in the final weeks of Guardiola's first campaign and throughout the preseason tour of the United States, City have looked far more like a balanced outfit.

The eyes may be focused on City's attack when the season gets underway at the Amex, but it's the defence that needs to answer the most questions. With a new goalkeeper in place in Ederson and with the outfield players in front of him seeming to settle quickly into a new style, it could provide a much more solid foundation for the creative players to work their magic.

Vincent Kompany enjoyed a strong end to the season last time out.

However, just like the last time City faced Brighton, it won't be a simple task. When the two sides met in 2008, it was the visitors who were the clear favourites on paper and it will be exactly the same on Saturday evening. Guardiola's team should win -- but Chris Hughton's men will still be riding the crest of the promotion wave and they will make it difficult for their opposition in their first ever game in the Premier League.

The home side will be under no pressure, expected to be battered by this latest incarnation of Guardiola's City. If that's to happen, the manager will need his attacking players to take the chances they create and for his defence to look as good as they did throughout preseason.

Whether or not Brighton struggle in the coming campaign is immaterial for the opening match, too. They'll still be playing with the confidence that promotion brings and the atmosphere inside the ground will be electric for their first appearance in the top flight since 1983.

It's a lesson City learnt the hard way when they were Cardiff's first opponents at home in the Premier League. The Welsh outfit were relegated bottom of the table in 2013-14, but won 3-2 against Manuel Pellegrini's side in the second match of the campaign. The visitors perhaps underestimated just how hostile the Cardiff City Stadium would be, following the Bluebirds' promotion the previous May.

However, City's record on the opening day is excellent. They've won the last six since failing to take maximum points in a 0-0 draw at Tottenham in 2010. The last defeat came before the previous meeting with Brighton, albeit only by a few weeks, as City went down 4-2 to Aston Villa in 2008.

There's understandable excitement among the City fans ahead of the new season, but if the team are to fulfil the expectations then the hard work has to begin now. A trip to Brighton should be an opening day win -- but history suggests it will be far from easy.