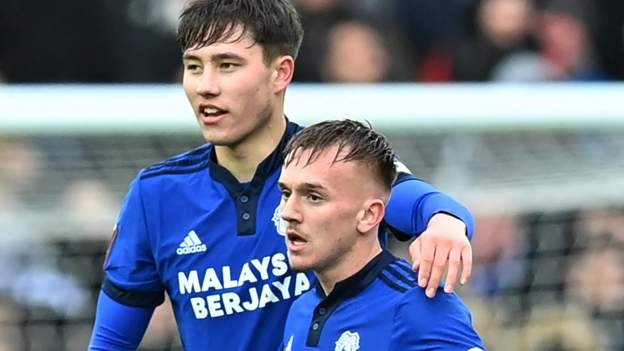 Cardiff boss Mark Hudson says he is excited by the return of young forwards Isaak Davies and Rubin Colwill.

Colwill, 20, who featured in Wales' World Cup squad, has started only one game this season due to injuries, while Wales Under-21 forward Davies has yet to play this term because of injury.

Hudson says Colwill has returned from Qatar fully fit and expects Davies back in full training from next week.

"He has completed his first 45 minutes, which is excellent news. He has still got some minutes this weekend to pick up, which will hopefully be his last one.

"That is his last tick in the box. As soon as that's done this weekend he will be with us, which is exciting news.

"He is like a new signing. He has looked brilliant. Because we have had 17 new players come in, no one has seen Isaak yet.

"He has trained with us through this period and has looked sharp. He has excited a few of the players we have got."

Hudson has inherited a Cardiff side that have struggled to score goals all season, so the return of Colwill and Davies is particularly welcome.

The Bluebirds are the lowest scoring side in the Championship, having found the net only 17 times in 21 matches, with Callum Robinson and Mark Harris their top scorers with three goals apiece.

Colwill's creativity should definitely help, with only one of his 11 appearances this season coming from the start, a 0-0 draw with Preston North End in August.

The forward made his last substitute appearance in Wales' 3-0 World Cup defeat to England, which Hudson says was a proud moment for the Bluebirds.

"Rubin returns fit having played in the World Cup, which is excellent for club and country," Hudson added.

"It is an amazing thing, we told him when he came back how proud we are of him as a football club. To have someone who has appeared in the World Cup is excellent... now we want to build on his game time coming forward."

Cardiff's aim after the resumption of the Championship following a break for the World Cup is to climb the table, with the Bluebirds 19th and just a point above the relegation zone.

The south Wales side sacked manager Steve Morison in September and Hudson was confirmed as his permanent successor in November.

Hudson believes Cardiff have benefitted from the World Cup break, adding: "We've put in some good time in on the training ground.

"It's a long season and we have had this break, I would like to think we can come back better.

"We need to get points and we know that."

Cardiff resume their Championship campaign with a trip to Stoke City on Saturday and will be without Aston Villa loanee Jaden Philogene who is recovering from a hernia operation.