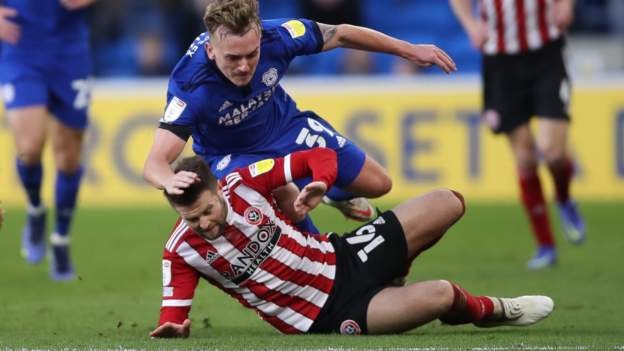 Sheffield United came from behind to beat 10-man Cardiff City 3-2.

Cardiff forward Mark Harris gave the hosts the lead at the interval, before Bluebirds skipper Sean Morrison was sent off for a foul on Billy Sharp.

Sharp put the Blades ahead after Morgan Gibbs-White cracked home a brilliant equaliser from 25-yards.

David McGoldrick's goal looked to have made the points safe, but Mark McGuinness' header set up a grandstand finish in the Welsh capital.

The win, Sheffield United's first in seven games against Cardiff, lifts the Blades up to 10th in the Championship, while Cardiff's poor home form sees them drop to 21st, one place above the relegation zone.

It could all have been so different for Cardiff who led at the interval despite the Blades missing several chances.

Bluebirds boss Steve Morison made two changes to the side that won at Luton with Harris and Isaak Davies coming in to replace Wales internationals Rubin Colwill and Kieffer Moore, while Blades boss Paul Heckingbottom recalled striker Sharp to replace Rhian Brewster, who was injured.

It was Sharp who twice could and should have given his side the lead in the opening 15 minutes, misses that for a time seemed like they would prove costly.

Sharp was twice presented with clear opportunities, firstly with a header from Jayden Bogle's cross and then as he raced clear following Morgan Gibbs-White's lofted pass, but both times Cardiff goalkeeper Alex Smithies saved.

The visitors also came close from a corner routine but Conor Hourihane fired over, before McGoldrick also found space in the Cardiff penalty area only for Smithies to deny him.

Cardiff did not threaten the Blades goal until the 30th minute when goalkeeper Wes Foderingham produced an incredible reaction save to turn the ball against the post after Curtis Nelson's header deflected off Bogle, with the ball scrambled clear.

However, the Bluebirds took the lead, perhaps fortuitously, when Sheffield United failed to clear a free-kick and Joe Ralls' scooped pass fell perfectly for Harris, who turned and fired home.

Davies then almost followed suit immediately as he cut inside after a fine run and shot at goal, but Foderingham saved at his near post.

The Blades were close to a leveller in first-half stoppage time, but Smithies saved bravely to deny Bogle after McGoldrick's deflected shot.

Cardiff had looked comfortable after the restart, but the game changed dramatically when skipper Sean Morrison just misjudged his challenge as Sharp raced clear, with referee John Busby producing a red card with Morrison denying a clear goalscoring opportunity, the key incident of the game.

The red card forced the hosts into defensive mode and they maintained parity for less than 10 minutes, with ex-Swansea loanee Gibbs-White curling home an exquisite effort from 25-yards.

It was almost two goals in two minutes for the visitors, but Smithies scrambled to save McGoldrick's shot which lacked power.

The Blades eventually went ahead on 73 minutes when they showed patience in working the ball from side to side, before Gibbs-White's incisive pass found Sharp who finished from close-range.

There was no denying the visitors once they were ahead and they assured themselves of three points when McGoldrick's shot squeezed home with the help of a slight deflection after a quick counter.

Cardiff were denied in the final minute of normal time as Foderingham saved from Moore's header, before McGuinness headed home a corner to set up a frantic finish.

The contest began with a tribute to Phil Dwyer, the former Cardiff defender who died at the age of 68.

Dwyer spent 16 years with Cardiff and holds the club record for most appearances, having played 575 games for the Bluebirds.

Attempt saved. Conor Hourihane (Sheffield United) left footed shot from the left side of the box is saved in the top centre of the goal. Assisted by David McGoldrick.

John Egan (Sheffield United) wins a free kick in the defensive half.

Attempt missed. David McGoldrick (Sheffield United) right footed shot from outside the box is too high. Assisted by Ben Osborn.

Goal! Cardiff City 2, Sheffield United 3. Mark McGuinness (Cardiff City) with an attempt from the centre of the box to the top left corner. Assisted by Joe Ralls with a cross following a corner.

Attempt saved. Kieffer Moore (Cardiff City) header from the centre of the box is saved in the top left corner. Assisted by Ryan Giles with a cross.

Oliver McBurnie (Sheffield United) wins a free kick in the defensive half.

Attempt missed. Kieffer Moore (Cardiff City) left footed shot from outside the box is too high.

Curtis Nelson (Cardiff City) wins a free kick in the defensive half.

Attempt missed. Jayden Bogle (Sheffield United) right footed shot from the right side of the six yard box is close, but misses to the right. Assisted by Conor Hourihane.