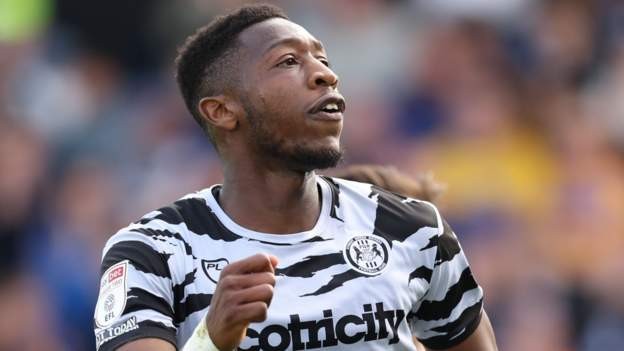 Cardiff City have signed midfielder Ebou Adams on a three-year deal with his contract at Forest Green Rovers due to end on 1 July.

The 26-year-old Gambia international is the Bluebirds' first summer signing ahead of the 2022-23 season.

"Hopefully I can be part of the team that takes Cardiff City back to where they belong," said Adams.

"I'm an all-round midfielder. The fans can expect 110% from me and for me to play with a smile on my face."

Cardiff boss Steve Morison said: "Ebou's going to bring athleticism and energy. He's really good on the ball. He's been a top, top player for Forest Green for a number of years.

"I said I was going to change the dynamic of the group. I wanted to change what you see from the players characteristic wise and he fits the bill.

"It is the right time for him to step up to the Championship. It's a big step for him, but he's buzzing, we're buzzing and we're looking forward to seeing him out there.

"We're really pleased to get it over the line."

Adams added: "I spoke to the manager and I was delighted with his plans, and I just wanted to be involved. We spoke about the style of football we would be playing, and it is a style I really like."