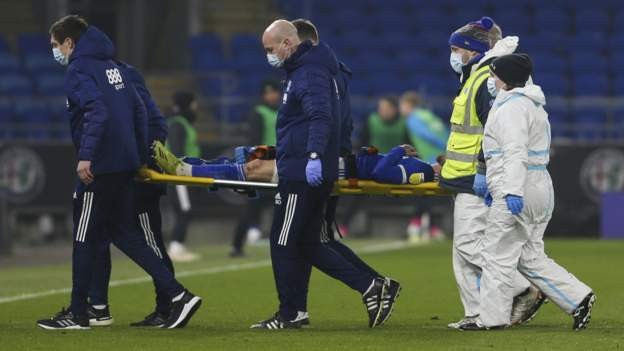 Joe Bennett was making his 30th appearance of the season

Cardiff City manager Mick McCarthy says defender Joe Bennett "is not in good shape," after suffering what appears to be a serious knee injury.

The 30-year old went down unchallenged in Cardiff's 4-0 win over Derby and had to be stretchered off the field.

"When someone goes down like that and doesn't move, you know they are hurt," McCarthy told BBC Sport Wales.

"He's not good. I'm not a doctor or a surgeon but he'll be assessed tomorrow. He's not in good shape anyway."

The left back, who joined the Bluebirds in 2016, is out of contract at the end of the season.

"When someone goes down and doesn't move you know he's hurt and it's a real sore one," McCarthy added.

"I've got absolutely zero worries about Joel Bagan. He's very unfortunate that he's got such a good player and experienced player in front of him. Joe's vastly experienced and a good player, but Joel has got big things ahead of him and is terrific," McCarthy added.